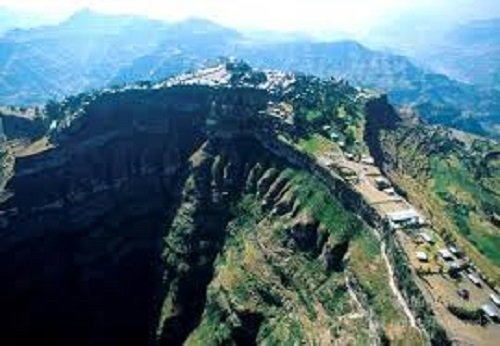 Gishen is one of the places of immense significance for Ethiopian Church and Ethiopian Orthodox Christians, perhaps even for Christianity itself. It has got a portion of the cross on which Jesus Christ is crucified is located.

The Bible explicitly suggests that the first christian convert was the Ethiopian eunuch, written in Acts 8. Before the disciples of Jesus went outside of Israel to preach Christ, Philip the Evangelist happened to meet Ethiopian eunuch who posed questions about the Christian faith and Jesus Christ before he embraced Christianity. Later on, he came back Ethiopia and preached the faith. The originality of Christianity in Ethiopia and the Ethiopian church is partly attributed to that story.

Ethiopian Church teaching has it that the Cross on which Jesus was crucified continued to do miracles and heal patients after the ascension of Jesus Christ. Descendants of the establishment that crucified Jesus Christ were embarrassed about it so much so that they had to hid the cross ; dug deep, buried it and made the place where it was buried a dumping place. Sometime in the forth century, Empress Eleni , who was said to have spiritual guidance, started the search for it, located and uncovered it after excavation work. There after, the cross lived in Jerusalem for centuries and was later shared by the then powerful countries. That’s how Ethiopia got a piece of it. [adToAppearHere]

Emperor Zera Yacob, known in history as Ethiopia’s philosopher king,after experiencing spiritual revelation, is said to have led exploration is search of a cross shaped topography in Ethiopia where he was supposed to place the Cross as per the assignement to do so. The search ended where the present days Gihshen is located- a perfect cross-shaped plateau. Gishen is in North Central Ethiopia in what is now Amhara regional state, north wollo zone.

The cross is referred to as, in Ethiopia, Gimade Meskel. It was placed in Gishen on Meskerem 21 sometime in the mid 15th century Ethiopian Calendar (on September 30 in Gregorian Calander) The church of Egziabhier Ab ( translates to God the father) stands, for over many many hundreds of years now, where the cross is kept. Church of Virgin Mary stands adjacent to it.

On this day every year, thousands of Ethiopians make pilgrimage to the holy place of Gishen. Many in fact walk more than 82 kilometers from the town of Dessie in a deliberate move to make the pilgrimage more meaningful. It takes to hike a mountainous topography before reaching the holy place.

In addition to believers in Ethiopia, the place has become for people who make religious travel even from outside of Ethiopia.