Abiy : If there is domination of ethnic Oromo in gov’t positions, I will resign in 24 hrs 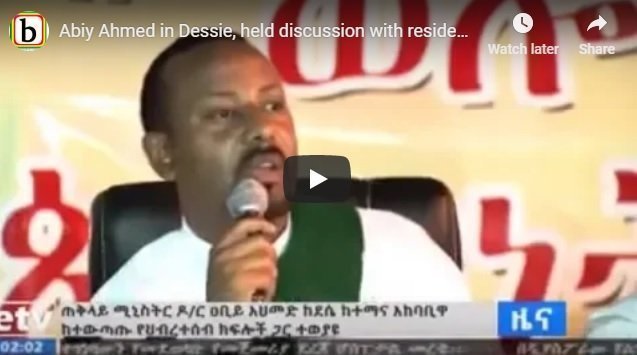 Abiy Ahmed, along with Demeke Mekonen and Ambachew Mekonen, was in Dessie on Saturday. He held discussion with residents in the historic 19th century Niguse Michael’s Gibet Bet ( Banquet Hall). Residents raised numerous questions including domination of ethnic Oromo in the Federal government positions. With regard to domination of ethnic Oromos in government positions, […] borkenaMay 16, 2019 Some of Ethiopian Orthodox Tewahdo Churches in Dessie, a town in North central Ethiopia, located some 400 kilometers to the north of the capital Addis Ababa. ___Join the conversation. Like borkena on Facebook and get Ethiopian News updates regularly. As well, you may get Ethiopia News by following us on twitter @zborkena

December 31,2016 Wollo University with campuses in Dessie and Kombolcha in North Central Ethiopia reportedly experienced student protest earlier today, according to Social Media reports with links from Dessie. Apparently, students’ protest started out as protest against the University administration on grounds of water shortage in the campus but was evolved to a political one […] September 30,2016 Gishen is one of the places of immense significance for Ethiopian Church and Ethiopian Orthodox Christians, perhaps even for Christianity itself. It has got a portion of the cross on which Jesus Christ is crucified is located. The Bible explicitly suggests that the first christian convert was the Ethiopian eunuch, written in Acts […]