Abdi Mohamoud Omar, a,k.a Abdi Iley, is said to be in custody after military engagement between his special forces and federal government forces.

Abdi Mohamoud Omar, president of Ethio-Somali regional state, is reportedly arrested following a clash military clash between Federal defense force and the region’s special force, that is believed to be loyal to the president.

Communication Head of Oromo regional state, Dr. Negeri Lencho, shared a status update on facebook and it seems to confirm that Abdi Illey is under is now under custody of Ethiopian Federal government troops.

“The tragic downfall of the puppet lowland dictator and his mafia groups is a big lesson for his highland old masters, fighting proxy war through manipulation and since recently threatening the federal system of disintegration.

Let genuine democracy prevails in our unified FDRE to the demise of the dangerous dictators and the prosperity and rise of peace and freedom loving Ethiopian people.” 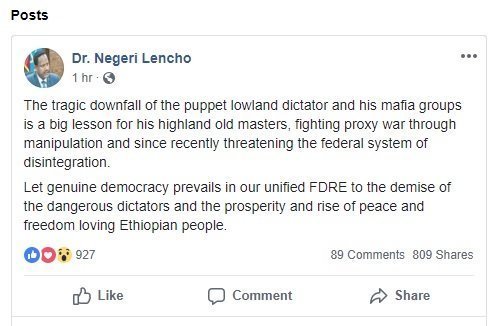 His remark indicates the involvement of what he described as “highland Old masters” – clearly a reference to Tigray People’s Liberation Front (TPLF) power elites including military chiefs who used to have a network of illicit trade in the region with the help of Abdi Mohamoud.

Jijiga, seat of Ethio-Somali regional state, is under the control of Ethiopian government forces and effort is underway to restore calm in the city in spite of reports of loots of businesses in the town.

Recent reports from Human Rights Watch accused the regional administration of egregious human rights violations at Jail Ogaden and called on Ethiopian government to improve the human rights situation in the region.

Abdi Mohamoud Illey was also facing increasing protest from residents of the region on grounds of human rights abuse.

State media have not yet reported about neither the development in Jijiga or the capture of the region’s most powerful man who used to enjoy unqualified support from Tigray People’s Liberation Front (TPLF) leaders.