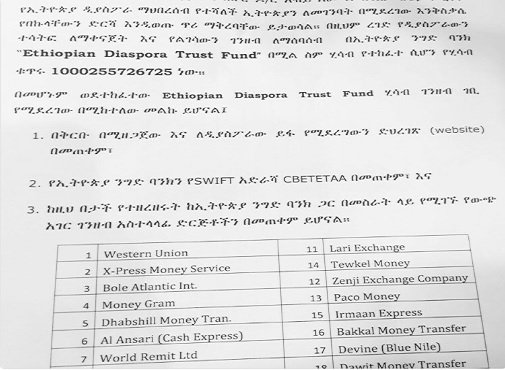 Fitsum Agega, Chief of Staff in the office of the prime minister, updated Ethiopians when about the Trust fund on his twitter page.

Here is an update and Bank account details of the #Ethiopia Diaspora Trust Fund. The Prime Minister Office will provide regular update. The account is now active. No doubt Ethiopians all over the world will make the initiative a success. pic.twitter.com/ys76m2BjuS

The account is opened at Commercial Bank of Ethiopia and the account number is disclosed as 1000255726725 – according to report by Fana Broadcasting Corporation.

International Money Transfer Agencies like Western Union and Money Gram are to be used to help the trust fund collect money from Ethiopians.

An estimated three million Ethiopians live in different parts of the world including in Europe, North America, and Australia. In 2016, Ethiopia earned over US$4 billion dollars in remittance from Ethiopians living abroad.

Prime minister Abiy Ahmed is lobbying Ethiopians in the diaspora to commit a dollar a day to support development works in Ethiopia.

He is visiting two US cities, Washington DC and Los Angeles, at the end of this month for the sole purpose of meeting Ethiopians and discuss the situation in the country.