ESFNA board of directors to consider Prime minister Abiy Ahmed’s request to make a speech to be considered for future tournaments. 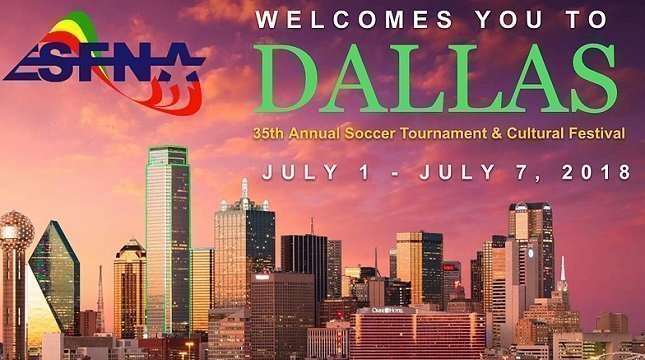 Ethiopian Sports Federation in North America (ESFNA) announced today that the Board of Directors voted not to accept Prime minister Abiy Ahmed’s request to make a speech at this years’s tournament which is organized in Dallas, Texas. Apparently, the prime minister didn’t directly wrote the board. It was the Ethiopian Embassy in North America which submitted the request.

The Board thought the prime minister’s request came in a short notice given the preparations for the tournament is already finalized. The other justification of the decision is that the prime minister’s presence in the tournament could attract huge crowd for which, the Board thinks, the venue will not be a fit. The Board also considered liability and security arrangement issues to reach at the decision.

Ethiopians have been debating the issue on social media for nearly a week now. In view of what Prime minister Abiy Ahmed has been doing in Ethiopia and for the sake of, many believe, making national reconciliation effort bear fruit, a considerable number of Ethiopians supported Abiy Ahmed’s request and expressed opinion that ESFNA should honor the request.

Others point to Board regulations that no politician is supposed to make speech at the event and say that the Board should invite one politician from the opposition ( and Andargachew Tsige who is released from prison this week is singled out) if it is to accept the prime minister’s request.

Still others think that no concrete measure is taken on the part of the government of Ethiopia to broaden the political space other than the release of political prisoners who should not have been in prison in the first place.

Although the decision of the board does not seem to be please quite a considerable Ethiopians living in and outside of the country, it brought about relief to many others.

From the statement of ESFNA, it seems the case that the Board could accept the request sometime in the future.

The 35th edition of the tournament is kicking off in Dallas on July 1 and will run till July 7. The event draws Ethiopians from across North America, Europe, Australia and New Zealand, among others.

Full text of the statement from ESFNA Board reads as follows

After days of deliberations regarding the request from H.E. Prime Minister Abiy Ahmed delivered by the Embassy of Ethiopia in Washington, D.C., the ESFNA Board of Directors have voted not to accept the Prime Minister’s desire to address Ethiopians in North America during the Dallas tournament in July, but request it to be at a future tournament. There were multiple pressing factors that led the Board to postpone the invitation, most importantly:

1. The request was received too close to the tournament and there were too many variables introduced by the prospect of the Prime Minister’s attendance—specifically to ensure the safety of all guests and attendees;

2. The size of the venue is not large enough to accommodate the potential audience the Prime Minister’s presence would create (an unscientific poll posted on ESFNA’s Facebook page reached over 140,000 people organically);

3. Most of the tournament-related particulars—including liability insurance—have already been in place, and the time constraint to rework those particulars will make it improbable if not impossible to guarantee the necessary changes would be accomplished in time.

ESFNA is cognizant of the wave of change occurring in Ethiopia. Our hope is these reforms continue and become more participatory of every stakeholder of the nation. ESFNA is acutely aware of the energy and vigor with which the Prime Minister is harvesting from the Ethiopian people. We encourage everyone, including Prime Minister Abiy, to continue to engage with the Ethiopian community through peaceful dialogue so that current and future generations of Ethiopians will continue to come together.

It is our hope that the office of the Prime Minister and ESFNA will have an opportunity to revisit this outstanding invitation at a later time.

In conclusion, we would like to thank our fellow Ethiopians from across the world who e-mailed, called and used every form of media and social networks to voice their opinions on the letter of request.

We hope to see you in Dallas this summer.
ESFNA


Join the conversation. Like borkena on Facebook and get Ethiopian News updates regularly. As well, you may get Ethiopia News by following us on twitter @zborkena