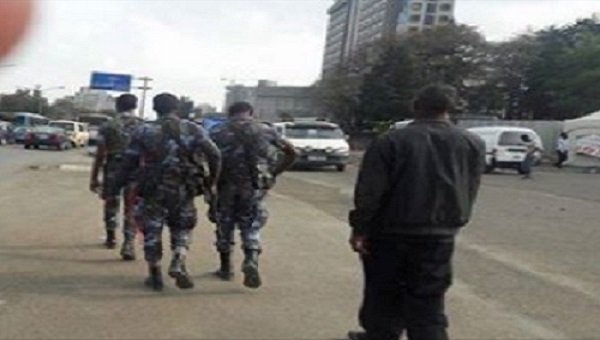 Addis Ababa is aware of what is going on in the outskirts and in all directions. Activists have called three days of strike which started yesterday. The trigger for it is a state of emergency declaration; the parliament fraudulently ratified it last Friday.

In the first day, towns outside of the capital were virtually brought, especially in Oromo region of Ethiopia, to a standstill. Businesses remain closed in many towns, as reported by BBC yesterday.

Mobility to and from the capital Addis Ababa has become problematic as the Youth movement is allegedly closing roads with rocks and giant woods. And the economic impacts of it are being felt in Addis Ababa.

It is not like Addis Ababa itself is indifferent to the movement for change in Ethiopia. Far from it. If what is simmering underneath is reaching a boiling point, perhaps the kind of protest we witness would not be like any other in the country. It is a city with nearly 3.5 million dwellers and many of its residents struggle to make ends meet. Most people have nothing to lose. But the kind of change that Addis Ababans needs is clearly different from what ethno-nationalists hope for.

When the 122 anniversary of Adwa victory was celebrated on March 2, residents came out in great numbers to show pride in the Ethiopian identity. In 2005, when coalition for Unity and Democracy which was a pro-Ethiopian movement appeared hopeful to bring about change, the reaction in the city was unprecedented in the history of Ethiopia. An estimated two million people crowded at Meskel Square with a great fervor to show rejection to the regime which happens to live to date. The relationship between the residents of Addis Ababa and the regime in power has not gone through major changes in that regard.

What seems to be holding Addis Ababa back is the fact that the movement for change outside of Addis Ababa, especially in Oromo region of Ethiopia, has a strong ethnic sentiment and is manipulated by politicians with a great appetite for ethnic politics.

Opposition movements like Semayawi party, Unity for Democracy and Justice, All Ethiopian Unity Party, among others, have succeeded to organize peaceful protests, irrespective of the size of the crowd, in Addis Ababa after 2005 mainly because these movements were pro-Ethiopian. Addis Ababa is a melting pot of Ethiopian identity, historically or now, as the residents are from different language backgrounds. The only prominent form of identity in Addis Ababa seems to be related to metropolitan and neighborhood-based. And the higher forms of identity that residents identify with is, of course, Ethiopian identity.

With intensified movement surrounding the city, it is inevitable that Addis Ababa will finally respond. In fact, it seems close to it. The regime has already sensed it and has deployed heavy military force.

Yes, there are many international organizations, including the African Union, in the city. Besides, Tomorrow the city will receive US secretary of state, Rex Tillerson. The day after tomorrow, Russian Foreign Minister, Sergey Lavrov is expected to arrive. These arrivals may need special security arrangement in light of the ongoing protest in close proximity to Addis. However, there are indications, based on citizens report on social media, that the military arrangement on the part of government seems to have a lot to do with fears of a potential outbreak of popular protest.