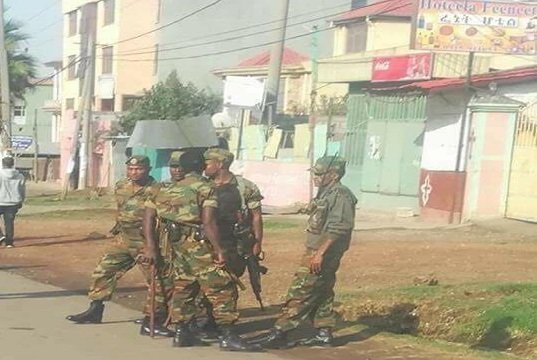 What government hoped for when fighting so hard to get a state of declaration bill approved in the parliament last Friday, and there was an allegation of vote rigging which the speaker of the say was rather an honest mistake during vote counting, was that it would enable the regime to control protest across the country.

What seems to be happening rather instead is that it catalyzed another round of persistent and pervasive protest, although changes in tactics, across the country. Roads leading to and from the capital Addis Ababa from different directions are reportedly closed in strategic locations with big rocks and woods, which is expected to pinch the capital Addis Ababa as the price of consumer goods soar due to a supply shortage.The road closure has hindered mobility of military personnel as well. Yesterday, a camion military overturned just outside of the capital Addis Ababa.

In Oromo region of Ethiopia, three days of stay at home strike is called starting today and it brought many towns in the region to a standstill.

A report by BBC indicates that businesses were closed and transportation was paralyzed which affected the mobility of people in the region. Gimbi, Ambo, Ginchi, and Guder are some of the towns that lived in the strike today.

As usual, the government deployed loyal security forces to the region and there was a reported exchange of fire with local police in Ambo town. At least five are reported dead and more than twenty were wounded. Bloomberg cited hospital sources to report that eighteen casualties were in hospitals for bullet wounds. Two civilians were reported dead upon arrival at Ambo hospital. DW Amharic radio confirmed protest called to oppose the state of emergency led to civilians deaths and wounds in Guder, Ambo, Nekemte, Nadjo, Ghimbi, Dembidolo and Bako, among other towns. As well, two were killed in Sakka Chokorsa town, Jima, according to reports by social media activist, Jawar Mohammed, who is based in Minnesota and claims to have contacts from many towns in the region.

In Gojjam, which is part of Amhara regional state in western Ethiopia, attempt to disarm legally registered gun caused skirmish with security forces. According to Ethiopian Satellite Television (ESAT), an elderly man named Derbie Ayele resisted the move and shot at least eight security forces and before he finally shot himself. Image of the elderly man is shared widely in social media but the news is verified as it is not covered by other sources at this writing.