Woldia rocked by gunfire for a second day in a row 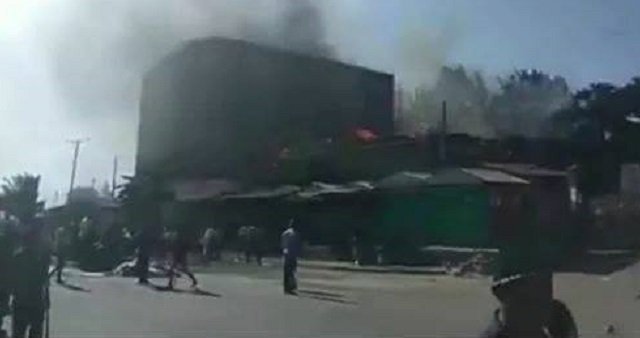 The city of Woldia in north-central Ethiopia was rocked this morning with gunfire a day after at least six civilians were killed by security forces who are purported, according to residents from the city, to be members of the defense force.

Associated Press report that appeared on The Washington Post indicates that the number of victims from the killings yesterday is seven. However, social media source from the city say that the number is ten. There are also reports that two members of security forces were killed.

At least twenty civilians sustained serious wound from the attack and are reportedly in the city’s hospital according to sources from the hospital who spoke on condition of anonymity. The youngest victim of the government attack is a fourteen years old boy. Unverified image of a man firing with a sniper gun is released in social media.

Funeral for the victims from yesterday killings took place in the morning and anger from the arbitrary killings by government forces triggered vandalism on properties whose owners are allegedly linked to Tigray People’s Liberation Front (TPLF) intelligence and government.

Arsema hotel, Mehcharie hotel, and Hailay building are among the properties attacked by protestors who are angered by killings of innocent civilians.

Amharic service of Deutsche Welle cited residents from the city to report that Adago, Piazza, and Gonder Ber localities of the city were affected seriously.

What caused the Woldia killing yesterday?

Residents of the city were celebrating Kanazegelila ( the feast Archangel Michael) which happens on the third day of Ethiopian Epiphany (Timkat).

After the procession of taking the Ark of Archangel Michael is completed in the afternoon, youth from the city went on celebrating the feast chanting and singing, as per the tradition of Timkat, and they were carrying Ethiopian flag which government outlawed.

The Ethiopian church still uses the outlawed flag and Ethiopians, except ruling party supporters, consider government imposed flag as something related to satanic belief with no relation, whatsoever, to Ethiopia.

As the youth hoisted the Ethiopian flag and start to chant anti-government songs seizing the Archangel Michael feast opportunity as a peaceful demonstration is prohibited by the government, members of the defense force deployed in the city with a mounted machine gun pick up tried to intimidate the youth and dispossess the Ethiopian flag.

The action from security forces tempted the crowd to throw a stone. One member of the police was hit by a rock thrown from the youth crowd and he fainted.

That is when government forces opened fire on the youth and killed at least five youth.However, another eyewitness account claims that security forces were firing from a rooftop with a sniper gun.

Activists see the killings in Woldia rather as a planned vengeful action on the part of TPLF security forces to retaliate the killing of Mekelle City soccer team fan.

In early December 2017, fans of Woldia city and Mekelle city team clashed after Mekelle city fans allegedly threw ethno-chauvinistic slur against Woldia city fans in the host city. The match had to be canceled and the two teams met in the capital Addis Ababa.

Woldia city is strategically located in north central Ethiopia one the way to Tigray, an ethnic base of the ruling TPLF.

The situation in the afternoon

President of Amhara regional state, Gedu Andargachew, was in the city today to deal with the situation and he told state media, Ethiopian Broadcasting Corporation, that he had meetings with youth from the city.

He seems to think that the youth, who was hoisting Ethiopian flag and chanted an anti-government slogan, were instigated by “others” but he was not explicit as to what entity was instigating them for a protest.

Hundreds and thousands of youth were arrested following the incident yesterday and today and they are now released, purportedly with the intervention of Gedu Andargachew.

The ruling party held a three weeks evaluative meeting and there was a claim that the cause of countrywide protest is identified.

As it turns out, the government does not seem to have either the will or the ability to address basic demands which may mean continued protest in other parts of Ethiopia as well.

Apparenlty, there was a protest in Bahir Dar and Gonder in the last two days as well but no reported casualties.