Woldia could not take it anymore. Opted to confront insult from Mekelle 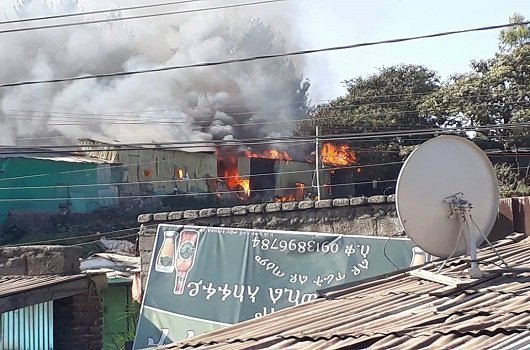 Mekelle City soccer team was reportedly escorted by Agazi, TPLF loyal special forces, to Woldia City for a match with the team from the city. But the involvement of Agazi forces coupled with what sources from Woldiya town say is a belligerent ethno-supremacist insult by Mekelle city fans in Woldia and adjacent towns instigated protest. They are said to have insulted people in the cities as “donkey” – apparently for enduring boundless TPLF born brutes – in all its forms.

The angry protest turned violent with no time and the city was rocked by a gunfire. Businesses which protestors believed are owned by residents in the city who are supporters of the ruling Tigray People’s Liberation Front party whose seat is in Mekelle are attacked and burned.

Agazi forces reportedly opened fire on protesters with live ammunition and tear gas. Nigussu Tilahun, Communication Head of Amhara regional state, wrote on his facebook page that one person is killed in the ensuing violence in the city and he dared to blame protestors claiming that protestors looted “hard-earned assets of people.”

Other sources from the city claim that number of people killed by Agazi forces is three. Agazi forces also reportedly made numerous arrests after mounting house to house searches to capture young people indiscriminately.

The protest spread to Kobo town, further north of Woldia along the way to Mekelle.

Journalist Muluken Tesfaw, reports of Amhara resistance, wrote in a social media update that fans of Woldia city soccer team who chartered 11 buses to come all the way from Gonder were blocked deployed security forces in the town of Sirinka, about five kilometers in the west side of Woldiya.

The soccer match didn’t take place due to the situation.

A conflict between teams from Tigray and teams from what is now Amhara region has become common phenomena as soccer matches turned out to be a stage where political differences are reflected with fever.

Tigray People’s Liberation Front completed its months-long appraisals this past week and resolved to get its way out of country wise resistance to its domination of Ethiopian politics and economy through iron fist after electing a die-hard Tigray ethno-nationalist who was in the intelligence unit, Debretsion Gebremichael.