Sudanese-Ethiopian troops commence patrolling for “drug smuggling” in the border

Sudanese-Ethiopian troops joint troops is now active patrolling the region. But what is it that they are patrolling? 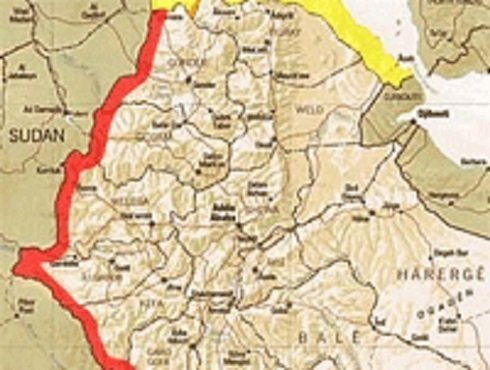 A report published yesterday by Sudan Tribune says that Ethio-Sudan joint border force became operational and is patrolling border area. It is composed of troops and security personnel.

The agreement to form the joint force was signed a few years ago and the government in Ethiopia was, it was apparent, aggressively pushing for it.

The joint border force is allegedly patrolling,as cited above, for human trafficking and drug smuggling. But Ethiopian regions adjacent to the Sudanese border are not that known for drug smuggle.

Rather sporadic problem in the region was skirmish between Sudanese and Ethiopian farms over land holdings. Ethiopians accuse the regime in Addis Ababa of illegally giving an extensive Ethiopian lands to Sudan.

Last month, there was a meeting between Sudanese officials and Tigrai authorities in Mekelle.

The regime in Ethiopia does not have joint patrol force with the government of South Sudan.