Despite the town of Gonder fell under siege following heavy deployment of defense force, defiant and graceful Gonder protest is carried out as planned this morning.

While demonstrators were loud and clear in their demands, civility and political maturity were clearly the hallmarks of the movement. No vandalism, no violence and no reported loss of lives so far.

However, breaking news update from Ethiopian Satellite Television (ESAT) seem to suggest all was not well in the adjacent areas outside of Gondar town. In East Belesa district ,Abnat, 15 policemen are reportedly wrested their assault rifles after they tried to block people from marching to Gonder town.

Media outlets like Fana Broadcasting,which are affiliated with the regime, reported yesterday that no request for a demonstration was received by authorities in Gonder and that no permit was given out.

No amount of intimidation or sabotage was able to avert the demonstration. And it seems to be the case that this is just the beginning of something big that is coming ahead unless the regime is ready to address the demands. Similar protests are held in other smaller towns in Gondar region. 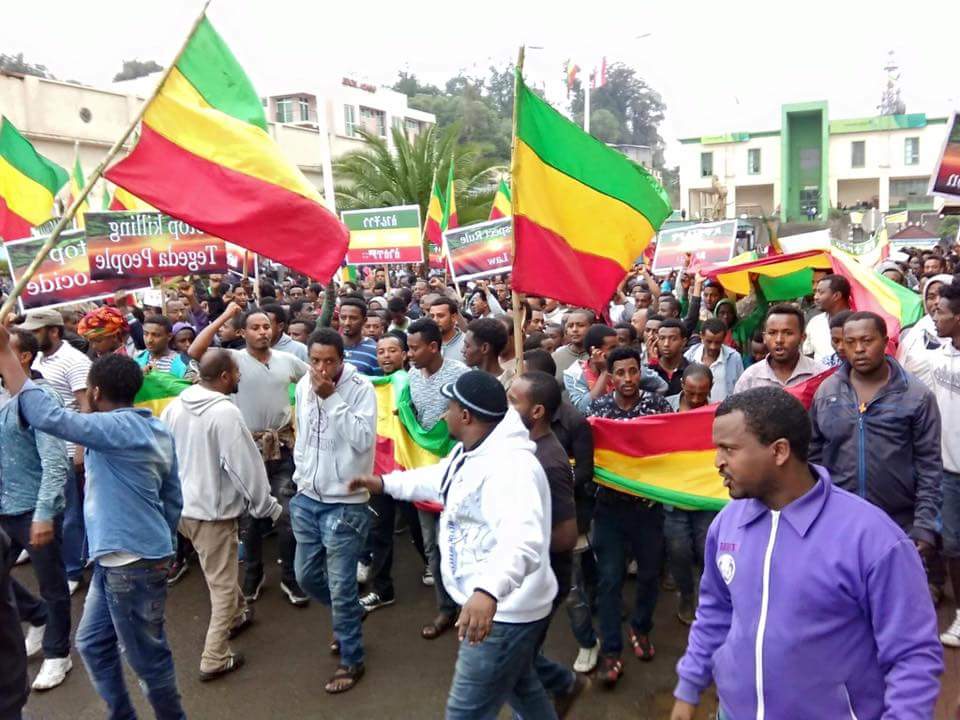 As seen in the picture, protester hoist Ethiopia’s historical flag. Regime’s tricolor with pentagram – which is imposed on the people with enforcement legislation- is nowhere seen in the Gonder protest. Demonstrators boldly demanded Wolqaite Amhara identity question be resolved in the interest of Wolqaite people, the government to stop killing Oromo brothers and even demanded an end to the Tigray People’s Liberation Front rule over Ethiopia. Tigray People’s Liberation Front ruled Ethiopia for over 25 years under the cover of a coalition – EPRDF.

Yesterday, unverified leaked audio was in circulation in Facebook. In the audio, Debretsion of Tigray People’s Liberation Front who is a “deputy” prime minister at the Federal level, was speaking in a furious mood that “there is no Wolqaite Question”

People in Wolqaite and Gonder on the other hand are boldly and clearly demanding that they should not be administered by Tigray regional state as their identity is Amhara, not Tigre.