Travel in Ethiopia with Kids (Claire A Davies)

In Travel in Ethiopia with Kids, Claire A Davies shares her travel experience with her four years old son. From Jet lag to food, among others, could be a challenge but suggests ways to overcome it.

Three weeks ago I was sitting on the balcony in a tropical garden in Ethiopia. The weather was gently sunny, parakeets were tweeting in the trees and troupes of monkeys were swinging back and forth providing entertainment. It should have been paradise but all three of us were miserable. I was ready to go into town to Ethiopian Airlines and book our flight home. Two spells of living in this country, and numerous short trips have meant that we had faced various obstacles: sickness, political instability, accidents, internet blockades, civil unrest but seriously, a persistently jet lagged and grumpy four-year-old was the thing that was going to break us.

Whose ridiculous idea was this anyway, you ask? Our boy was adopted from Ethiopia and we wanted him to have a positive view of his birth land and form connections with the people.

In our moment of misery in the tropical paradise, we had to seriously rethink how we were doing this holiday. We were on the kind of steep parenting learning curve equivalent to trying to walk up a ski slope. Nevertheless we managed to pull everything together, make a new plan and come back happy and with memories of a trip that ended up working for everyone.

Here a few of the discovery points (I suspect any parents reading knew these already but read on).

This caused huge problems of dysregulation, hunger cries immediately after breakfast and sleep issues even though the time difference was just three hours. We made a beginner’s mistake of taking the day flight from London to Addis. Apparently, all parents know that children do much better on night flights. We found that out the the day before.

After a night flight back home, our son was back in school 24 hours later, no problem.

This turned out to be more like ‘things not to do’. Trying to do too much added to general grumpiness and fatigue. At the end of week one, our son announced he did not like moving hotels. He had had enough of going outside. Addis can be seriously full-on with pollution, traffic and hawkers circling the car. Spending more down time in the hotel was seriously helpful.

Entertainment was the same as kids want anywhere: there are plenty of pools in Addis, the Kuriftu Resort pool in Bahir Dar and the Haile Resort in Gondar. The Haile Resort also had an excellent playground.

We spotted monkeys in the hotel and hippos on the lake in Bahir Dar. Aside from that, he enjoyed spotting different forms of transport (donkeys, horse and cart, tuk tuks), picking up extra large sticks, climbing on statues, riding in taxis, kicking footballs around with other kids, sitting on the motorbikes of a tour group and, err….watching the ipad.

Taking several flights with Ethiopian Airlines was a huge highlight and something he still talks about.

Ethiopians were universally warm and friendly towards our son. May I add that many were extremely gracious when he responded to their kind comments with ‘bum bum’ or something equally rude. The worst was when this would happen in the hotel lift – probably best to take the stairs and avoid embarrassment.

Playing with our Ethiopian friend’s children was fantastic – just throw them a ball and let them play football, the universal language. 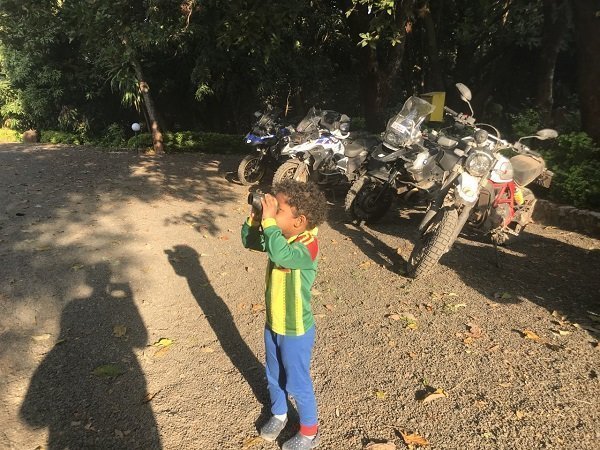 Local food can be very child friendly – if you can make yourself understood. Luckily our son likes a lot of Ethiopian food, however pasta with tomato sauce and pizza are very common.

The key is to ask for everything ‘alicha’ or non-spicy. You can’t place too much emphasis on this. Otherwise the chef will be like, ‘just a teaspoon or so of something to liven it up.’ Say ‘betam alicha’ and wave hands to emphasise.

At the end of the day, Ethiopians again stepped forward graciously when we had to send a few fiery dishes back to the kitchen.

Breakfast is usually toast, omelette or fruit. No-one minded when we bought our own Ugandan version of coco pops in the supermarket and brought it into the hotel restaurant.

Thirteen people die in road accidents every day in Ethiopia. Seatbelts have only recently become compulsory for front passengers, however finding rear seatbelts is a problem. Child car seats are almost unheard of.

We took the Bubble Bum inflatable child booster seat. This worked well – providing we could find a car with rear seat belts. Lots of taxis seemed to be without these or else they were wedged down between the back seats.

Best to find a car with the rear belts and stick to that one – or else hold them on your lap and live with a bad case of mom guilt.

You do not have to fork out for a hotel with pool. Most will allow you to use the pool with a day pass. Some of these are expensive (800 birr per person at The Hyatt in Addis) but Harmony Hotel pool was only 250 birr and a good place to meet local kids.
Zeist Lodge in the Bole Rwanda area of Addis has a nice outdoor area and was a great place just to sit and play games, have ‘quiet time’ and play with the lovely hotel staff.

There were lots of things we didn’t have time to do. Kuriftu has a water park at Bishoftu just south of Addis. There’s a children’s playzone at Edna Mall centre in the Bole district of Addis. This includes a playground for small children and numerous other attractions such as mini racing cars.

Older children might be more interested in the historical sites. We did not visit the Unity Park but apparently there are numerous attractions of interest to small children including things to scramble over and some lions. Plans are underway for a small zoo.

Ethiopia is do-able with children but let’s face it – it isn’t going to rival a beach in Spain. Still, despite our rocky start, everyone came home feeling happy and saying it was good. In a way, even more so because the beginning was hard.

The problems at the beginning just became a distant memory. When can we do this again?