Despite dealing with all sorts of challenges in the country including security challenges and rule of law, Ethiopian Grand Renaissance Dam seem to be a priority for Ethiopian government again. Leadership in the ruling coalition says it will work on it diligently. 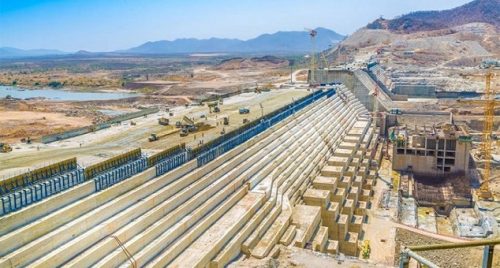 Framework agreement among Nile River riparian countries and the level of water fill Ethiopian Grand Renaissance Dam, among issued discussed during the briefing in the office of the prime minister on Saturday.

Prime Minister Abiy Ahmed and his deputy, Demeke Mekonnen and other stake holders in the country held discussion on the status of Ethiopian Grand Renaissance Dam. The office of the prime minister has confirmed the news on its social media pages.

Among other things, the discussion and presentation included cooperative framework agreements, trilateral negotiations (involving Ethiopia, Sudan and Egypt), progress of the construction and the status of water filling, among other things.

If all goes well, the plan is to generate power by the year 2021 using at least two turbines.

Egypt has been disputing construction of the dam on alleged grounds that it will negatively affect the flow of water to Egypt.