Adwa and Abiy’s mixed message on federalism in Ethiopia (By Teshome M. Borago) 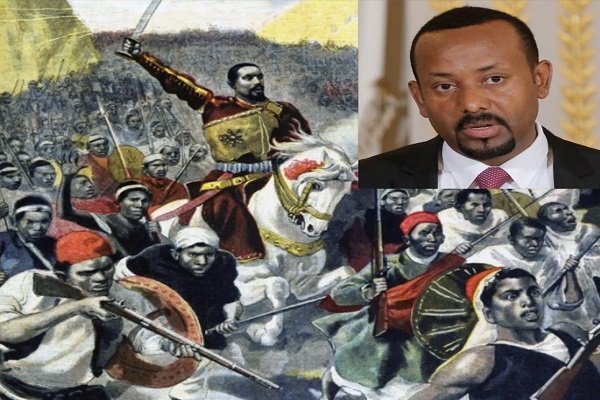 As the 123rd anniversary of Ethiopia’s historic victory at ADWA approaches, Prime Minister Abiy Ahmed’s ruling party in Oromia (ODP) recently made a brazen statement that ethnic-federalism is “non-negotiable.” This undemocratic announcement by the Oromo Democratic Party (ODP) has been condemned by many Ethiopians, including by members of the largest opposition party Ginbot 7.

ODP’s dictatorial statement seems to be a copy & paste of czarlike slogans often used by Oromo nationalists like Jawar Mohammed (OMN) and Mohammed Ademo (OBN). In fact, Mohammed Ademo posted an article this week criticizing my old article on TRT World media discussing the dangers of ethnic federalism in Ethiopia (a system of segregation fueling ethnic land conflicts nationwide.) According to the conclusions of Mr. Ademo’s 2017 article, the only reason for endless ethnic clashes in Ethiopia is TPLF; so everything will be rosy and peaceful when TPLF loses power. Unfortunately, that has not been the reality. Thanks to the leadership of PM Abiy Ahmed, many things did improve after TPLF was gone, but ethnic conflict is not one of them. With hundreds dead and a record 2 million Ethiopians displaced since mid 2018 (and counting); every region has already witnessed some form of tragic tribal bloodshed due to ethnic competition. Even in major cities, Dire Dawa‘s 40/40/20 segregation policy was a source of recurring violence; while Addis Ababa is claimed by both ODP hardliners (and their Rush Limbaugh-like puppeteer Jawar Mohammed) and by Amhara nationalists of Abiy’s own partner organization ADP.

This Ethnic federalism policy is not only a threat to peace, but it is also an antithesis to democracy and individual liberty. It has institutionalized ethnic apartheid and a permanent underclass. Plus, for millions of mixed-Ethiopians born from multiethnic families, the policy does not even make sense on a personal level. To make matters worse, ethnic federalism can not even be peacefully implemented because many territories are still contested between tribal elites. For example: Moyale, Metekel, Kamashi, Sitti, Baro, Dire, Welkait, Dera, Qimant and Raya, just to name few; but even Adama, Hawassa and countless woredas inside SNNPR as well as the long border between Somali & Oromia states will remain the site of bloodbath for years to come.

A recent New York Times (NYT) article criticized “the fiction of ethnic homelands” in Ethiopia, and recommended territorial-federalism with citizenship based democratic institutions (civic nationalism). Western diplomats and Ethiopian scholars have long warned of the risks of institutionalizing ethnic division.

The alternative, civic nationalism is not a new or foreign concept for Ethiopia. It was already manifested in our historic victory at the 1896 Battle of Adwa when tens of thousands of Muslims from Harar and Oromos from Shewa proudly said Tigray is MY LAND and travelled north to die for their country. Those countless Ethiopian heroes who made Ethiopia the pride of black people worldwide…like the Wollo Oromos who died fighting Italy in Adwa…and their Amharic speaking compatriots, would be embarrassed today by the new generation who are now fighting each other over scraps of shared land.

So it is an oxymoron for Ethiopia to celebrate the meaning of ADWA today, while normalizing ethnic segregation nationwide. It is also ironic that we finally honored former Emperor Haile Selassie with a Statue, but we remain under tribal apartheid, a system that he helped defeat by training & arming Nelson Mandela.

Some defenders of ethnic federalism use scare tactics and propaganda. When modern Ethiopians support civic nationalism and oppose ethnic federalism; tribal elites usually accuse them of nostalgia for feudalism or unitary state. To the contrary, the modern alternative to ethnic federalism is not a unitary one, but MORE federalism. The current tyranny of ethnic blocs must be decentralized and replaced by small geographic regions tailored to local realities on the ground. Some supporters of ethnic federalism also say the system is good on paper, but they claim it failed only because we do not have real democracy. But, when did we ever had a real democracy? This is the same excuse given by Derg (Mengistu) apologists of the Marxist-Leninist regime. Just like Marxism, ethnic-federalism must be abolished; not expanded.
Ethnic nationalists seem always confident that the new generation is too indoctrinated by tribalism to support liberal democracy, even during the 2005 national election. However, the CUD opposition party easily won the election on a platform rejecting ethnic nationalism while advocating unity and individual liberty; until the ruling party rigged the results using “State of Emergency.” So When the ODP today says ethnic-federalism is “non-negotiable,” is it threatening to repeat what happened in 2005 again in 2020?

The irony of this story is that Prime Minister Abiy himself acknowledges that Ethiopia is a great mixed nation that does not deserve a primitive system of ethnic federalism. For example, Abiy is often quick to discourage Amhara nationalists who claim ownership of contested regions like Metekel, Raya and Welkait or even Addis Ababa, Adama and Dera zones in Oromia as “Amhara regions.” Last year, Abiy told Amhara activists that many Ethiopians in Amhara region today have Oromo ancestors because of the 1600s Oromo migration that eventually led to Afan Oromo speaking Gondar rulers in ancient Abyssinia. He is correct; Amhara is a Supra-ethnic group that any Ethiopian may and have become by adopting the language. And he is correct that Oromo were Abyssinians as well. Even Oromo nationalist scholars like Dr. Merera Gudina have written a lot about the unique “dual history” of the Oromo.

Abiy similarly reminded Tigrayan nationalists that the thousands of Oromos who fought in ADWA have resulted into blood mixture with Tigreans (despite linguistic assimilation.) Certainly, what Abiy is preaching about Ethiopia’s intertwined history is old news. Not only Tigray and Amhara, but we know that even a significant part of today’s Oromo population itself descends from non-Oromo ancestors of extinct kingdoms, like the Ennarea, who gradually and linguistically assimilated into the powerful Oromo pioneers of southern Ethiopia over the centuries. So migrations and conquests have molded Ethiopians into one people and one nation in more ways than they can imagine.

Abiy’s rhetoric promoting Ethiopian nationalism and his recent plan to create an “Identity Commission” shows that he knows that the current ethnic federalism has major problems. Abiy’s administration also dropped tribal IDs in Addis Ababa and added the “mixed ethnicity” category for the upcoming Ethiopian CENSUS. If officials, activists and local media educate the public of these important changes to the upcoming Census; there is a strong possibility that the “mixed-Ethiopian” category will become as big as the “Oromo” and “Amhara” classification. Recognizing the millions of mixed-Ethiopian population institutionally will help weaken tribalism and ethnic polarization nationwide.

Despite these potential reforms, Abiy is giving mixed signals about identity politics. Abiy’s silence or inaction during the endless tribal conflicts, and the recent totalitarian statements made by his ODP political organization are sending mixed messages nationwide. Just like civil rights leaders in America stood firm against racism; if Abiy wants to be a transformational reformer, he must be clear against tribalism. Abiy must remember that millions of Ethiopians in Addis Ababa rallied for him because he promoted “Ethiopiawinet” and unity; not because he supports one tribe ownership of Addis Ababa or any city. Abiy must know that even the Qeerroo Oromo movement would have collapsed in 2018 under TPLF’s divide & rule brutal strategy, if the Amhara & Gondar protests had not joined (followed by his bipartisan election to premiership.) Without interethnic unity, Ethiopia becomes a weak prey for her enemies. Ethiopia is a country of minorities, thus no single majority identity can ever earn a mandate to govern.

Ultimately, the Ethiopian people are not expecting Abiy to be the prime guardian of Ethiopian nationalism because, after-all, he is a hostage stuck inside an ethnic party. But as a reformer, he should not reject the will of the people. Historically, Nation-states have always been shaped by the mainstream school of thought of their urban centers. Abiy or any leader with a political ideology incompatible with the mainstream can not stand on the people’s way without turning into another dictator like Meles Zenawi. Therefore, in Ethiopia, everything is negotiable, reversible or at least constitutionally amendable, including the disastrous ethnic-federalism.

The day we tear down the walls of tribalism in Ethiopia will be remembered forever as the rebirth of the spirit of Adwa. Abiy Ahmed and every Ethiopian citizen must ask ourselves: are we on the right or wrong side of history?
__
Contact writer at Teshomeborago@gmail.com or https://mobile.twitter.com/mtborago