Ethiopia re-opened its embassy in Eritrea in a ceremony held in Asmara.

Prime Minister Abiy Ahmed and President Isayas Afeworki raised the Ethiopian Federal government flag in the premise of the embassy during the ceremony.

Eritrea offered a building which used to be a government ministry and Prime Minister Abiy admired the location of the embassy as well. 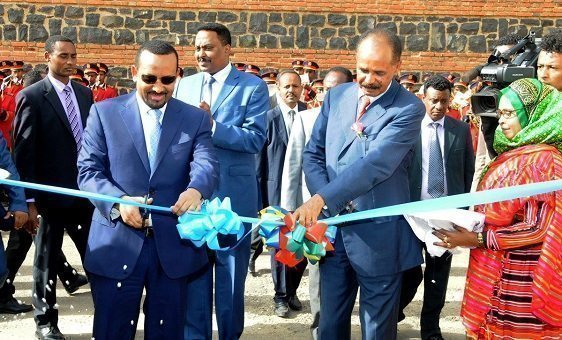 Ethiopian embassy remained closed for the last twenty years due to the state of war which officially ended in July of this year as leaders from the two countries reached an agreement to do so.

Ethiopia has named Redwan Hussien, who used to be Ethiopia’s ambassador to Ireland, as the new Ethiopian Ambassador to Eritrea.

Eritrea, too, has reopened its embassy in Ethiopia when President Isayas Afeworki visited Ethiopia in July.

Ethiopia is also cooperating with Eritrea to undertake road maintenance both Assab to Ethiopia and also from Zalambessa direction in northern Tigray.

The effort to transform the horn of Africa into a sphere of cooperation so as to bring about development and security in the region is noticeable.

Eritrea is playing a crucial role in that regard despite the sanctions from Western countries, which seem to be bringing Eritrea to powers like Russia.

Yesterday, a trilateral summit was held in Asmara between Somalia, Ethiopia, and Eritrea. And the three countries have reached an agreement to enhance their cooperation.

Today, Eritrea sent a high-level delegation to Djibouti with the aim to iron out differences that led to conflict between the two countries.