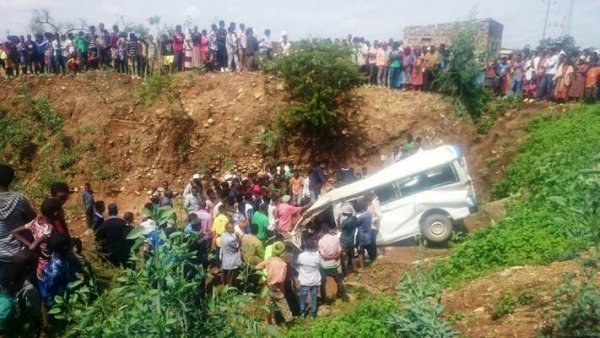 A van carrying twelve passengers left Mekelle for Selehlaha, in Tigray region, northern Ethiopia, yesterday. They meant to attend a wedding ceremony over the weekend. Unfortunately, it did not make it to its destination due to tragic accident.

Twelve of the passengers and a pedestrian are killed according to a report by Fana Broadcasting. Two other people sustained serious injuries.

A picture (above) released by Fana broadcasting shows scene of the accident with a van plunged to a gorge.

The source cited Berhane Mebrat, who is deputy inspector at Quantar Abergelle district, apparently where the accident took place, to report that the accident is related to speed.

borkena would like to express condolences to the families and friends of the victims.