Warm welcome awaits Abiy Ahmed the likes of which no Ethiopian prime minister before was lucky to see. 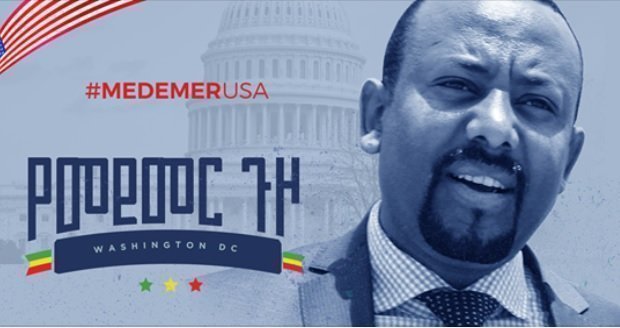 “Tear down barriers, and build bridges” is the overarching message and motto of his trip, which is not diplomatic. He is reportedly traveling for the sole purpose of holding a town hall meeting with Ethiopians. A month or so ago, it was announced that he will be having meetings in Los Angeles and Washington DC. According to recent reports from government media, however, there will be a meeting in Minnesota where a large Oromo speaking Ethiopian community live.

The prime minister will be speaking about ongoing changes in Ethiopia and about the role that Ethiopians should play in it while Ethiopians in the United States will have the opportunity to speak about how they can support the change, Ethiopian Ambassador to the United States, Kassa Teklebirhan, elaborated the purpose of the travel.

The meeting in Washington will take place on July 28, 2018, starting 9. a.m. local time, 801 Mt Vernon Pl NW, Washington, DC 20001. The next stop is Los Angeles a day after the meeting in Washington, and the last stop is Minnesota on July 30. The chief of staff, Fistum, tweeted a website that has all the details about meeting location and time (Check it out here) Ethiopians have finalized preparations to warmly receive the man whom they call my prime minister for the first time in ages. Thousands of T-shirts bearing Ethiopian Prime minister picture is reportedly sold in the three cities.

Unlike the case with prime minister Abiy Ahmed, government officials who happen to travel to the United States in the past tend to generate a protest rally and numerous Ethiopian officials have been humiliated by an angry crowd in many occasions.

In May 2012, the late Meles Zenawi was invited to the United States along with the president of Ghana, among others, to make a speech at Ronald Regan Center in Washington DC. He was shocked when a prominent Ethiopian journalist, Abebe Gelaw, interrupted him in the middle of his presentation shouting “Meles Zenawi is a dictator!” Soon Zenawi fell ill and never recovered from it, and some openly relate his untimely death to his experience at the Ronald Regan Centre.