United Arab Emirates awarded Ethiopian prime minister Abiy Ahmed and Eritrean president Isayas Afeworki the country’s highest order honour, the Zayed Award, for “vision, courage, and statesmanship to end the war and bring about peace between the two countries”, as Eritrean Minister of Information Yemane Gebremeskel puts it in his twitter message.

HH Crown Prince Sheikh Mohammed bin Zayed Al Nahyan, has awarded the Presidential Medal, The Zayed medal to HE Prime Minister Abiy Ahmed & HE President Isaias Afeworki for bringing peace between the two countries. This is the highest medal in the UAE. #Eriteria #Ethiopia #UAE pic.twitter.com/d7F4Idycu1 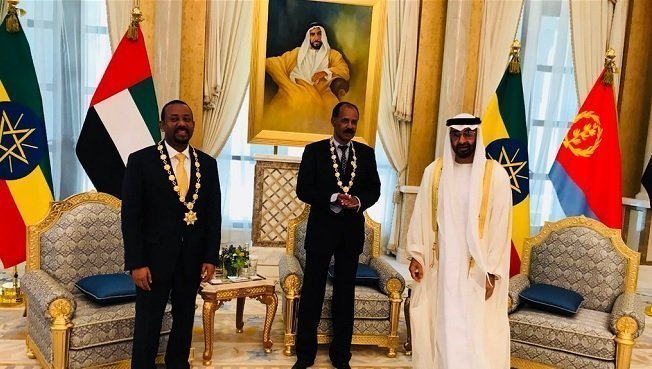 The Crown Prince reportedly reaffirmed commitment to support efforts for development and to support their partnership.

Crown Prince Sheikh Mohammed re-affirmed the commitment of the UAE to consolidate its partnership with Eritrea and Ethiopia and to support their efforts for development pic.twitter.com/1uhz2FnzgO

Mohammed bin Zayed Al Nahyan is believed to have played a significant role in the initial stages of talks to bring about peace between Ethiopia and Eritrea although the countries carried out much of the task of restoring a relationship that transcends normalcy without mediation by a third party.

The two countries have named their respective ambassadors to Addis Ababa and Asmara, Eritrean embassy is opened in Addis Ababa, Ethiopian Airlines started flying to Eritrea and using Eritrean Airspace to fly to other destinations in the middle east.

The United Arab Emirates(UAE) has also hosted a Tripartite Summit in Abu Dabi earlier today. Trade, investment, and regional security issues were discussed. UAE is investing more than US$ 2 billion in Ethiopia and has also pledged US$1 billion in financial aid to help ease foreign currency shortage in Ethiopia. The Middle Eastern country is also believed to have deals with Eritrea on matters related to port use.

The Eritrean Ministry of information disclosed Joint Statement from the Eritrean-Ethiopian-UAE Tripartite Summit in Abu Dhabi. The statement called upon the International Community to support the achievements of Ethiopia and Eritrea in terms of restoring peace which is believed to have positive impact for the stability and development of not only the two countries but also for the entire region.