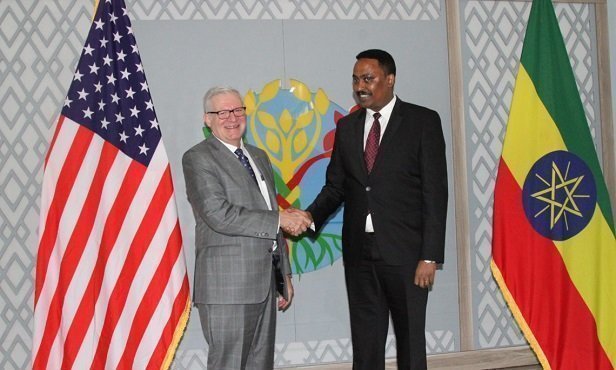 United States says it could help investigate grenade attack during a rally in Addis Ababa on June 23. US under secretary of Commerce, Gilbert Kaplan,reportedly remarked about it when he met with Ethiopian Foreign Minister Dr. Workneh Gebeyehu in Addis Ababa today, reported state affiliated media.

The Under secretary expressed support for Abiy Ahmed’s liberal reforms in the economic sector. United States seem to be hopeful for bolstered “bilateral” trade and investment.

But that does not seem to be why US under secretary of commerce is visiting Ethiopia. Mr Gilbert led a large delegation of U.S business and US government officials from a range of offices who visited the Ethiopian airlines and they reportedly hold discussion with the CEO of the airline, Tewolde Gebremariam. The Ethiopian airlines is among Ethiopian public enterprises to be “partially or fully” privatized. It was in early June that the government of Abiy Ahmed suddenly introduced privatization of key public enterprises in what is said to be is effort to overcome foreign exchange crisis.

Ethiopian Airlines already reached deal with two US companies, General Electric (GE) and Honeywell. US embassy in Ethiopia reported the deal as follows :

US companies’, with investment in Ethiopia,experience in terms of foreign exchange shortage and ways to address the challenge was also discussed according to information available on the website of US embassy in Ethiopia.

United States Ambassador to Ethiopia, Michael Raynor,and Mr. Gilbert Kaplan have hosted a roundtable which is attended by Ethiopian government officials and delegation of US companies. Ethiopian officials reportedly highlighted investment opportunities in the country.