Grenade attack orchestrated by forces who do not want to see the unity of Ethiopia, says PM Abiy Ahmed

Addis Ababa deputy police commissionaire,Girma Kassa, and eight other from federal police commission are in custody in connection with the grenade attack during the rally at Meskel square today.

Massive rally organized by Ethiopians to express gratitude to prime minister Abiy Ahmed and his team for what has been achieved in the last three months is marred by grenade attack.

The explosion was heard after the prime minister completed his speech which took about twenty minutes and it happened behind the stage where he was speaking from,according to borkena sources.

A day before the event Addis Ababa police made preparation to ensure the safety of everyone at Mesqel Square. Perhaps they expected something but evidently not a grenade attack.

The attack was serious enough that it has affected about 156 civilians, according to information from the ministry of Health. Amir Aman, the minister, tweeted that around 5 pm local time, it was confirmed that 1 person is dead and 10 have sustained life threatening injury.

Most of the injured are admitted at Tikur Anbesa hospital in the heart of the capital Addis Ababa.

The prime minister, deputy prime minster and other high ranking government officials have visited victims of the attack at Tikur Ambessa hospital this evening. 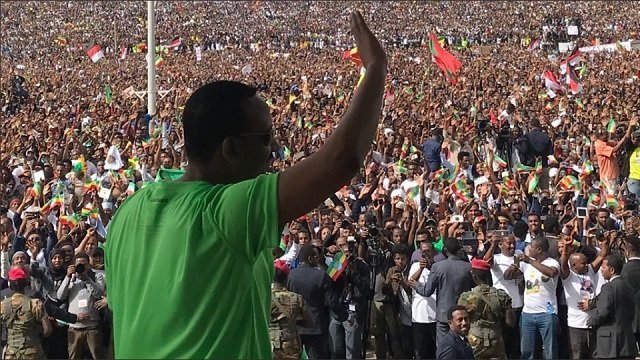 “You are ambassadors of spirit of love,forgiveness and unity,” they told the victims as cited by as state affiliated media.

Much is not known at this point as to who exactly is behind the attack.

The prime minister thinks it is an act orchestrated by forces who do not want to see the unity of Ethiopia. He added, those who are trying to divide Ethiopia will never succeed.

In his speech at Mesqel Square, the prime minister told the crowed, which is believed to be 4 million, “Hate harmed us. Love transforms” He added ” A leader with no love is empty. A leader is empty if there is no unity of the people. A leader is nothing without the support of the people.”

Some analysts think that the attack was meant to assassinate the prime minister and drag the country into crisis of unprecedented scale. The belief among many Ethiopians seem is that the attack has something to do with TPLF elites whose lost their privilege and power as the change to what seem to be democracy is deepening in the country.

Amhara and Oromo regional states condemned the attack and described it as a work of “forces of destruction.”

Dr. Mulatu Teshome, president of Ethiopia, says the attack at Meskel Square was saddening and abominable act that has to be condemned.

Federal Government Communication Affairs minister statement says the attack was orchestrated by “forces who are unhappy with the progress and unity of our country and people.” It added that the rally was organized by the people, not by political parties, and was a remarkable success as people were not divided along ethnic,religious or political affiliation.

Ethiopian Broadcasting Corporation reported that government communication affairs minister, Ahmed Shede, disclosed this evening that Addis Ababa deputy police commission and eight other members of the federal police are in custory in connection with the grenade attack.

Police has not yet announced the identities of those who are behind the attack but claimed that it is investigating it and will disclose the result as soon as the investigation is completed.

Ethiopia was in a deep political crises for more than three years as anti-government protest spread across the country so much so that government had to declare a state of emergency twice in less than two years time.

Despite what is believed to be an orchestrated ethnic violence and displacement of Ethiopians in different parts of Ethiopia, the relative calm in the country as opposed to what was feared before the coming of prime minister Abiy is admired by most Ethiopians. And most Ethiopians seem to believe that better days are yet to come although the belief is hinged on the promises of the new prime minister.