Lemma Megersa is acting on displacement of ethnic Amhara in oromo region as his Oromo People’s Democratic Organization completes its conference in Adama. 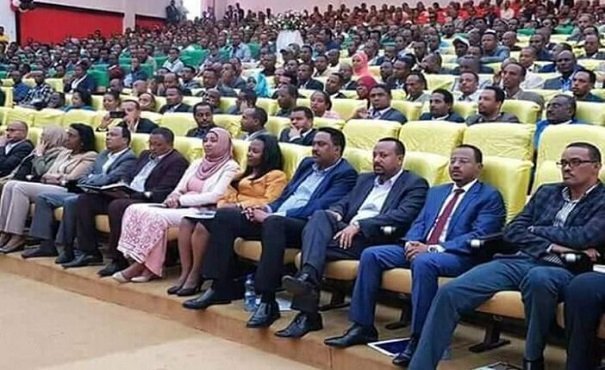 Oromo Peoples Democratic Organization vows to fight radicalism and ethnonationalism as it is completing its 8th organizational conference which has been underway in Nazret (Adama) for the last three days.

It was in a statement that the organization issued after completing the organizational conference that the party made clear it will work on producing decisive leaders capable of fighting corruption, radicalism, and ethnonationalism in addition to responding to development needs of people in the region.

Radical ethnonationalism proved to be the challenge to the administration even after Abiy Ahmed, who is the chairman of the party, took over the position of prime minister some two months ago.

In the last two weeks, ethnic Amhara Ethiopians who have lived in the region for many decades were subjected to ethnic-based violence in areas like Buno Bedele ( Illubabor zone) and Qelem district in Wollega (Western Ethiopia). Hundreds of innocent Ethiopians were displaced as a result of the attack. The party says that instabilities and violence observed in the region recently are resolved and a return to normalcy is ensured.

An online media outlet from Ethiopia cited Oromoia Broadcasting Network to report that zone and district authorities who were involved in the displacement and attack of ethnic Amhara Ethiopians are removed from their position and from the organization.

Lemma Megersa, the vice-chairman of OPDO and president of Oromo regional estate, whose popularity has grown fast outside of Oromo region, is quoted as saying :

“Ethnic Amhara people are our brothers. We can not live without them and they cannot live without us. The recent changes we saw [perhaps a reference to the reverse of oppression by TPLF] is the result of the struggle of the two people. Ethnic Oromos are living in Amhara with no problem. Therefore our Amhara brothers should be able to live Oromia region with no fear and be able to work and succeed. It is observed that there are elements who are trying to create suspicion between the two people and people in the two regions need to reverse this.”

Following an evaluation within the party, one thousand and five hundred leadership at different levels are removed from their position and five hundred and forty are relegated to a lower position, according to a report by Oromia Broadcasting Network.