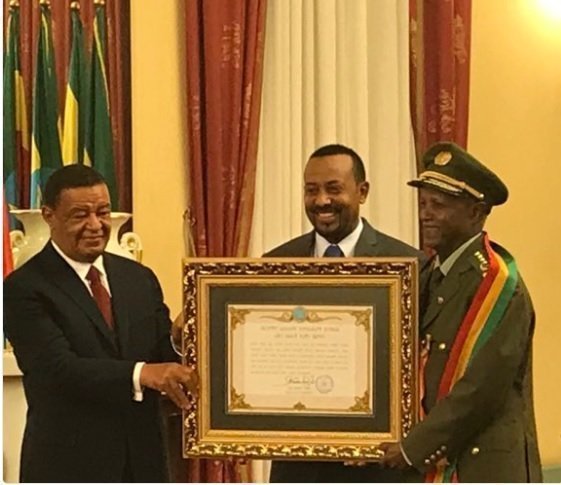 In what seem to be a move to reform the defense force, prime minister Abiy Ahmed appointed General Seare Mekonen as the new chief of the staff of the National Defense Force today, Fitsum Arega, Chief of Staff in the office of the Prime Minister, announced on twitter today.

General Seare Mekonen is replacing General Samora who has been chief of staff for more than two decades.
He was presented with an award in recognition of “distinguished services” in a ceremony organized in the office of the President, Mulatu Teshome, and Abiy Ahmed was present during the ceremony.

The Chief of Staff remarked, “The nation will be forever grateful to General Samora—the most prominent military figure”

HE PM Dr Abiy Ahmed appointed General Seare Mekonen as the new Chief of Staff of the NDF effective today. He will replace General Samora Yunis. The nation will be forever grateful to General Samora—the most prominent military figure—for his distinguished services. #Ethiopia pic.twitter.com/FDbk9ilntl

There have been calls from former military generals like Tsadkan GebreTinsae calls for the retirement of Samora Yunis. The veteran Tigray People’s Liberation Front member and former guerrilla fighter, Samora, is one of the most unpopular figures.

The new Chief of Staff of National Defense Force himself was a combatant in the guerrilla force of TPLF. There has been a rumor that the TPLF resisted major changes in the defense force. According to statistics released by opposition movement, Arbegnoch Ginbot 7, more than 97 percent of leadership position in the military is dominated by TPLF former combatants and the issue has been mentioned as one indicator for the domination of TPLF over Ethiopian society.

In a related development, Prime minister Abiy Ahmed decided to reverse decision made during the late Meles Zenawi and restored stars and full ranks of General Alemeshet Degfe and Brigadier General Asaminew Tsige who was in prison for more than nine years after he was charged with attempted coup. But the generals will be retiring with their full stars.

The new prime minister’s reform measures have been hailed by many Ethiopians as positive steps but there is more appetite for more structural reforms specially along the lines of ending ethnic conflicts and ensuring the rights of Ethiopians to live and work in any parts of Ethiopia in dignity and without any fear of ethnic based abuse.