Andargachew Tisge Free at last, celebrated in Addis Ababa after he was released 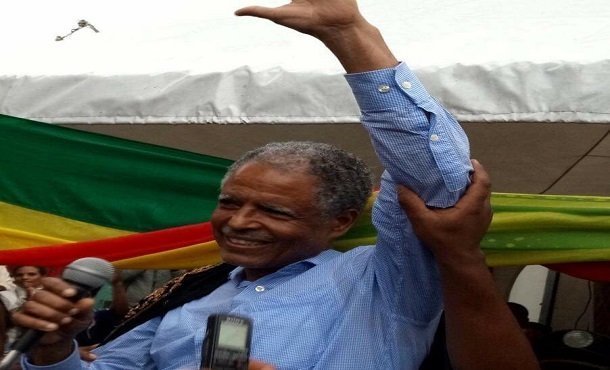 After days of suspense following the announcement of the release of Ethiopia’s endeared opposition leader Andargachew Tsige, his supporters in Addis Ababa had finally a chance to celebrate him in the premises of his father’s home in Bole and nearby streets.

The crowd that showed up in his fathers home to cheer Andargachew Tsige up turned wild out of the joy that he is indeed released, there was some doubt even after his release was announced, and that Andargachew was even unable to speak.

Andargachew himself sounded as if he was celebrating the courage of the youth rather than his own release from prison so much so that he had to speak to the crowd before he even greeted his father who was waiting inside his home.

“I did not expect this to happen,” said Andargachew Tsige. And then he was interrupted by ululation and wail from the crowd. “You deserve more!” Yell supporters from the crowd.

In fact, what is observed is not expected. The Ethiopian flag that the regime outlawed was hoisted. The state of emergency which aimed at restricting the rights of Ethiopians for assembly and freedom of expression and which is still in effect is totally ignored.

As a symbol of his heroic struggle against a political force whom most Ethiopians consider indigenous fascists, a reference to Tigray People’s Liberation Front- a party that is believed to have looted Ethiopia and dominated politics for the past twenty-seven years, Andargachew Tsige’s supporters crowned him with Ethiopian traditional and patriotic vestments and a medal minted with “Lanchi new Ethiopia” – title of the song that Andargachew himself wrote.

For TPLF elites and supporters, Angargachew is a “terrorist” and they spent millions of US dollars to pay for his abduction from Yemen in 2014.

Horn Affairs website owner, Daniel Berhane, who is believed to be an insider to the TPLF establishment took no time to vent his frustration because of the release of Andarchagew Tsige and he is allowed to visit his father’s house where his supporters were waiting.

“It is interesting that a foreign citizen and “an enemy combatant”(or “freedom fighter”) is still in town after release from prison.
It is one thing to release him due to compassion, it is a different thing to let him stage political rallies without even having a valid visa.
And what if he violates another law before leaving Addis? Another diplomatic headache!
The level of disorder within the government is amazing.”

Andargachew Tsige is believed to for the UK as the regime in power reportedly wants him to leave the country within 48 hours.

“Despite I do not have information [in prison], I understand that many Ethiopians were worried and campaigning for may release. Because I know that Ethiopians will never sleep in peace. But I never expected reception I have seen here. I cannot go into it in detail. I express my thankfulness for all those who toiled for the coming of this day,” said Andargachew Tsige.

From the tone of his first speeches from his fathers home this afternoon after he was released, it does not seem the case that Andargachew will give up the struggle for a democratic Ethiopia. But he did not say it.