Ten important points Abiy Ahmed made in his speech

Many are still asking “who is Abiy Ahmed?” If his speech is a true reflection of what he belives in, it is a significant clue to answer the question. 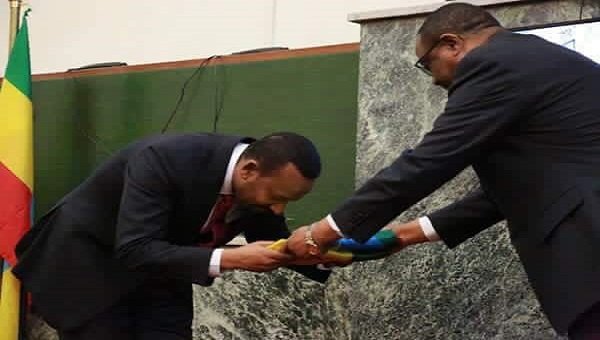 The internal struggle for power within the ruling party culminated with the coming to power of Abiy Ahmed, from Oromo People’s Democratic Organization (OPDO) which is one of the coalition members in the ruling party, as the next prime minister of Ethiopia.

When Hailemariam Desalegne announced his resignation on February 15 in the interest of “peaceful transition of power and to be part of the solution for the current political problem in the country,” the struggle for the prime minister position between the four ethnic-based parties that constitute the ruling coalition became clear.

One of the actions that OPDO took in the ensuing weeks, as a reaction to Hailemaram’s resignation, was to call for an emergency meeting, apparently to map out the road for the struggle for power, what was then a vacant Federal position.

While Lemma Megersa could stand a chance for the prime minister position within the ruling coalition by virtue of being chairman of OPDO, there appeared to be a constitutional hurdle he couldn’t jump; he was not a member of the parliament.

Abiy Ahmed, then deputy of OPDO, was a member of the parliament but lacked the status of the chairmanship of the organization which is one of the criteria to qualify for the prime minister position. The organization overcame the challenge in a way to make Abiy Ahmed run for prime minister. Lemma Megersa was relegated to a vice-chairman of OPDO without losing his role as president of Oromo region of Ethiopia while Abiy was promoted to chairmanship position. Consequently, Abiy was qualified to run for prime ministerial position.

For Abiy Ahmed to win the prime minister position, however, the support of the majority of members in EPRDF council, a 180 members body drawn from four ethnic based parties, is needed. In that regard, OPDO has strengthened relationships with other ethnic-based parties within the coalition particularly Amhara National Democratic Front (ANDM). This alliance proved to be crucially important at a critical time.

Chairman of ANDM,and deputy prime minister, Demeke Mekonen,by extension ANDM, decided not to run for the contest and opted for remaining deputy prime minister. The idea, according to insiders, was to focus on the election of what the regional communication head, Nigussu Tilahun, described as “competent person” capable of rescuing Ethiopia from the current political entanglement. The role of ANDM was crucially important throughout the entire process.

In the election within the EPRDF council, Abiy Ahmed, 42 years old, emerged winner with 108 votes of the total 180 votes. Shiferaw Shigute, head of EPRDF office and new chairman of SEPDM (Southern Ethiopian People’s Democratic Movement) got 59 votes and Debretison Gebremichael who is chairman of TPLF got only 2 votes. Analysts seem to suggest the defeat of both Shiferaw and Debretsion fundamentally represent the defeat of TPLF.

The meaning of Abiy’s election

One thing that has to be clear is that the ruling coalition, one way or another, is a champion of the “revolutionary democracy” ideals of the late Meles Zenawi.It is also clear that the coalition is still under the firm control of Tigray People Liberation Front (TPLF), which dominated politics and the economy for nearly 27 years, although it is politically weak and lacks moral legitimacy; key institutions in the country like the security apparatus and the military are still under TPLF. The parliament itself is entirely occupied by the ruling coalition.

It is in that light that it has to be clear that the election of Abiy Ahmed as prime minister has little to do with the wishes of Ethiopian people and that explains much of the skepticism from politicized Ethiopians.

Although the words of Abiy resonated well with Ethiopians, the power based of Abiy Ahmed is ethnic politics and hence has to deal with ethno-nationalism if he is to remain relevant to the rest of Ethiopians. On the one hand, radical ethno-nationalism with an alleged support from historical enemies of Ethiopia has a significant ideological influence on in the region where Abiy’s ethnic party exercises power. On the other hand, he will be consistently challenged by TPLF as the latter strives to regain dominance over Ethiopia; this is the potential source of uncertainty in the weeks and months. Some Ethiopians go to the extent of foreseeing a possible coup in the near future.

Although they might offend radical ethno-nationalists, some of Abiy Ahmed’s points from his speech are seen in a positive light by Ethiopians who are not the supporters of the ruling coalition.

1) Reflected on Ethiopian history in a positive light which is unusual for products of TPLF politics. He described Ethiopia as a fertile mother with sons and daughter with unrivaled commitment to defend her and protect her. He noted there are numerous challenges in the country and they need to be addressed sooner rather than later. The focus should be, he said, building a better country.

2) Emphasized on the unity of Ethiopia. He highlighted the sacrifices paid by patriotic Ethiopians in the struggle to maintain Ethiopian unity and sovereignty. No challenge is stronger that unity.

3) Underscored the importance of democracy and freedom as a matter of survival, and that Ethiopians deserve them. Yet, he noted that freedom is not a government charity for the people rather a natural right that emanates from the dignity of man.

4) Noted that freedom of expression, the right to assembly and the right to organize need to be recognized and observed as per the constitution of the country.

5) People have the right to criticize the government and participate in governance; government is a servant of the people. Vowed his government will work on building a democratic society.

6) Democracy will suffer when the government is not tolerant; in that regard, he emphasized the importance of the rule of law

8) He noted the developments in the Horn of Africa as a scene of competing for foreign powers interests and expressed willingness to end a conflict with Eritrea and called on the Eritrean government to demonstrate readiness.

9) Vowed to fight corruption; underscored the need to work to end a situation where Ethiopia is a country where one works hard while the other robs.

10) In terms of social policy, the noted on the importance of improving the quality of education, investing in the youth and women. Economically, he highlighted the challenge in negative trade balance and other challenges in a range of sectors and vowed to improve that. He also called on Ethiopians who live abroad and seem to be ready to working together with them.