Abiy Ahmed’s history is not much known except that he was in the military and was a minister of science and Technology. This evening he emerged as the new chairman of the ruling coalition which means that he is the new prime minister, too. Can he do much without structural and ideological change in the ruling coalition? Will be a prime minister with real power or another stooge? 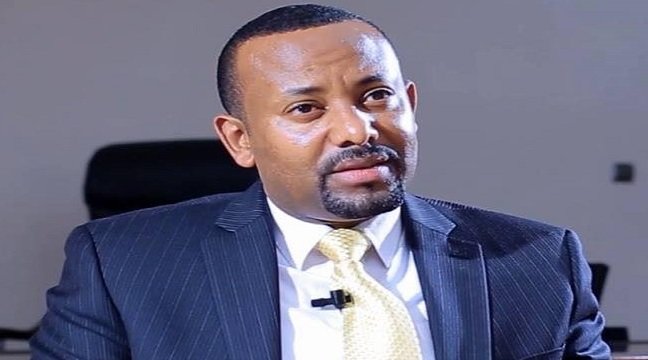 Abiy Ahmed reportedly got 108 votes out of the 180 votes. His rival from Southern Ethiopia Peoples Democratic Movement (SPDM), Shiferaw Sigute, who is believed to be one of the most TPLF loyal politicians, got 59 votes.

As odd as it may sound, the council has also accepted the resignation of Hailemariam Desalgne. The council met a week ago after the completion of the ruling coalition executives which is a 36 member body. The meeting was undertaken in the closed door. However, leaked information revealed that the meeting was unprecedentedly acrimonious.

In a one minute video that emerged yesterday, Abiy Ahmed and the outgoing prime minister Hailemariam Desalegn were seen cutting an OPDO 28th birthday cake and Abiy Ahmed face was glittering. The rest of the council members were waving a small flag of OPDO.

For some, the video was meant to show, on the part of EPRDF, that the ruling party is not divided as claimed by opposition voices and political pundits. Yet, some went further to speculate that Abiy Ahmed is elected as prime minister.

Soon after Hailemariam Desalgne announced his resignation as party chairman and prime minister and in what appeared to be a contest between the four ethnic parties within the ruling coalition, Oromo People’s Democratic Organization (OPDO) held an emergency meeting and elected Abiy Ahmed as Chairman while relegating Lemma Megersa to vice-chairman without changing his role a president of Oromo regional state. The purpose, as it became clear to many, was to position Abiy Ahmed for the contest for Chairmanship of the ruling coalition which entitles the position of the prime minister.

From the leaked information that appeared on social media, it was Dr. Abiy’s party, OPDO, which was reported to be assertive and challenging during the ruling coalition council meeting, which hints that the win did not come easy. Based on the votes he got, it appears that 63 members of the council who are not OPDO voted for Abiy Ahmed. It is speculated that OPDO’s strongest ally in the ruling coalition is ANDM and it is presumed that most of the support for Dr. Abiy outside of OPDO came from ANDM. Nigussu Tilahun, head of Amhara regional state communication department, said in a Facebook update this evening; “ANDM did its level best and contributed its part in the effort to elect a qualified person.” The one paragraph update goes on to announce that Dr Abiy Ahmed is elected.

There is a tendency to see Abiy Ahmed as a reformer with a capacity to resolve the political crisis in Ethiopia. For critical voices in the opposition, to see Dr. Abiy as a reformer is a wishful thinking. And they point to the fact that he will be working within the framework of governance structure over which TPLF has dominance. For example, the intelligence and the military are still under the firm grip of TPLF. As well, people point to the fact that Abiy is politically a product of the very same regime that has caused the political crisis with a tendency for ethnic politics. Yet, Abiy is credited for his measured rhetoric that seems to have resonance with a considerable number of politicized and sort of “westernized” Ethiopians.

The election of Abiy Ahmed may sound an achievement for OPDO from the point of view of ethnic politics but in reality, his election could rather signal another layer of political challenge for Ethiopia.

Critical Ethiopians seem to dismiss Abiy Ahmed’s election as chairman and next prime minister as irrelevant.

Only people with insane mind can think #AbiyAhmed will brings the fundamental change the people are demand. #Ethiopia

Ethiopia is currently under a new state of emergency since February 16, a day after the resignation of Hailemariam Desalegne. Mostly high ranking die-hard TPLF military officers are in charge of the Command Post, a body that is administering the country under the state of emergency. Two days ago, that body ordered the rearrest of some politicians and bloggers who were released last month including Eskinder Nega and Andualem Arage. In Bahir Dar, about 19 activists and academicians were arrested while they were dinning; they were arrested on the pretext of breaking state of emergency rule which restricts freedom of expression and assembly.

A brief history of Abiy Ahmed

A Wikipedia profile indicates that Abiy was born on August 15,1976, in Jimma, Ethiopia. He was born in the town of Agaro.

In the past, he served as a military officer including in the UN peacekeeping mission in Rwanda, as the secretariat of OPDO and Deputy president of Oromo region of Ethiopia and head of Urban Development and Housing, among others. He has also served as minister of science and technology at the Federal government level. In the military, he has attained the rank of Lt. Colonel.