The Polistitution of “John” Debretsion Gebremichael 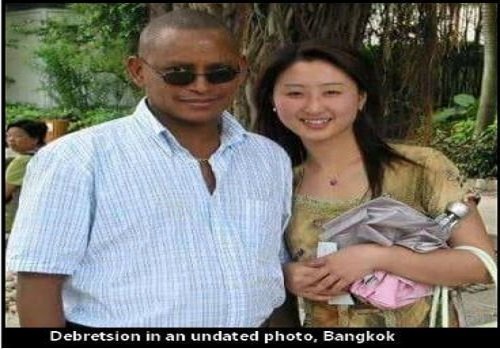 It has been said that prostitution is the world’s oldest profession.

The second oldest profession in the world is said to be politics.

There are hookers and there are politicians hooked on hookers.

What do you call a politician hooked on hookers?

If indeed there could be such a profession, it appears fitting to one of the top members of the Thugtatorship of the Tigrean Peoples Liberation Front in Ethiopia (T-TPLF).

Debretsion Gebremichael in his secret life is a professional “John”.

In America, the term “John” is used to describe those men who have a habit of frequenting whorehouses and using the services of prostitutes.

John Debretsion’s disgusting secret life of sex, lies, pornography, sex tourism, debauchery and corruption was recently documented and laid bare in an article, complete with screenshots of a treasure trove of inside job hacked emails and browser history browsing for hookers, by Abebe Gellaw, the well-known Ethiopian investigative journalist and executive director of Ethiopian Satellite Television.

The sexual escapades of John Debretsion are shocking and challenge one’s credulity.

According to Abebe, Debretsion has a decade-long “history of employing prostitutes, escorts and call girls in many cities including Cairo, Yaounde (Cameroon), Bangkok, Hiroshima, Tokyo, Geneva, Seoul, Busan (S. Korea), Mumbai (India), Dubai, Hong Kong and Las Vegas in search of whorehouses. “Whenever he travels abroad, he scans the Internet for young girl escorts, strip clubs and brothels. He looks for high class escort services,” Abebe asserted. Debretsion used “fancy conferences” on “women’s rights and equality” to ply his global trade in prostitution.

How these facts become public is quite interesting. For over a quarter of a century, the T-TPLF has been exceedingly successful in stonewalling any information about their internal workings and personal lives.

The iron clad Mafia-style T-TPLF omerta (code of silence) of secrecy which kept many of their scandals under wraps was recently shattered in factional cannibalistic wars among the bosses.

In a no-take-prisoners political vendetta, they are ratting out each other in public. Debretsion’s enemies hacked his emails and made them public to embarrass, discredit and ultimately drive him out of power as payback for muscling Abay Woldu out of the top job in Tigray.

Interestingly, in the continuing infowars among the bosses of the T-TPLF crime families, they are all spilling the beans on each other, snitching to the opposition, finger-pointing and becoming valuable informants.

It is ironic that the man who abused his position to hack emails of his opponents and arbitrarily turned the country’s internet services on and off should get a taste of his own medicine. When Debretsion clamped down on the internet in October 2016, the damage to the Ethiopian economy was massive costing at least US$500,000 per day in lost GDP. The collateral damage on foreign direct investment caused a drop by a fifth in the first half of 2016.

According to Abebe’s report, Debretsion’s “email accounts show his participation in corrupt practices, including a key role in diverting tens of billions of birr allocated for the Grand Ethiopian Renaissance Dam (GERD) in General Kinfe Dagnew’s ponzi scheme involving the Metals and Engineering Corporation (METEC), which is operationally linked to the Endowment Fund for the Rehabilitation of Tigray (EFFORT).”

In other words, Abebe’s allegations suggest that Debretsion as chairman of the Ethiopian Electric Power Corporation is running a kickback, fraud and embezzlement scam diverting money from the dam construction to his friends and cronies using shell corporations.

Since Abebe’s report came out, two weeks ago I have refrained from making comments hoping Debretsion and his T-TPLF would vigorously contest the serious allegations.

Their apparent vow of silence in the face of such explosive allegations is quite unusual as they generally respond by denying allegations swiftly.

The TPLF leaders are habitual deniers of all accusations. For a decade and half, they denied holding political prisoners. They denied hacking computers of opponents abroad. They denied Meles Zenawi was dead after ESAT announced his passing. Recently, they denied supporting the South Sudan rebels. They denied committing war crimes in Somalia.

Why aren’t they denying the explosive allegations in Abebe’s report? Why is there complete radio silence from the TPLF on this extraordinary scandal?

As a lawyer, I know all too well there are at least two sides to a story. Abebe has told his story about Debretsion with explosive facts. It is necessary for Debretsion to admit, deny or otherwise explain Abebe’s allegations. Alternatively, he could apologize (or not) and resign his position.

Absent these actions, it is incumbent upon the T-TPLF to undertake an independent investigation into the allegations. For the past year, the T-TPLF bosses have been talking about a “deep renaissance”, “self-criticism”, clean government, good governance, correcting mistakes of the past and so on.

Here is an issue that cries out for an investigation and make good on the promise of clean government unblemished by scandals of prostitution.

Did Debretsion break any laws, convert public funds to finance his sexual escapades with prostitutes? Only an independent investigation could answer that question.

Was Debretsion compromised by Egyptian intelligence as he caroused the Cairo whorehouses?

Debretsion is “chairman of the Ethiopian Electric Power Corporation” which oversees the operation of the so-called Grand Renaissance Dam over the Blue Nile. Ethiopia and Egypt Grand Ethiopian Renaissance Dam today are waging a “cold war” over the construction of that dam which could easily turn into a hot war at the snap of the finger. The presidents of Egypt and Eritrea met a couple of weeks ago as tensions rise between Ethiopia and Egypt.

Is it possible Egyptian intelligence may have successfully compromised Debretsion? Could he be an Egyptian sleeper agent in the TPLF regime?

This is not mere speculation. It is not uncommon for foreign intelligence services to collect damaging information on politicians and leaders, particularly by trapping them in compromising sexual situations, and forcing them to work as moles (deep cover agents). The Russians call the use of compromising material “Kompromat”. In America they call it “honey trapping”.

If Debretsion has been honey-trapped and “kompromatted” by Egyptian intelligence and spilled the beans on the Dam construction, what remedies could be taken to mitigate damages?

Overlooking Debretsion’s alleged extensive history of prostitution on the public treasury and turning a blind eye over the possibility of a foreign government compromising him shows the T-TPLF bosses are putting Ethiopian national security at extreme risk and playing cynical games with their propaganda of an emerging reinvented government based on accountability.

I do not doubt that Abebe Gellaw has a sterling reputation as an investigative journalist. He has exposed numerous scandals and corruption in the T-TPLF over the past several years.

Of course, that does not mean that his report cannot be challenged. But the only person who can challenge Abebe on the facts is Debretsion. That is why it is mandatory and the public interest to hear Debretsion’s side of the story.

In defense of Debretsion, and in the interest of fairness, I must argue that he is probably not the only one among the T-TPLF bosses who uses the excuse of “conferences” to trot the globe in search of prostitutes and whorehouses. What is true of Tweedledee Debretsion is likely to be true of the other TPLF Tweedledums.

It is said birds of a feather fly together. I am sure there are many other T-TPLF birds who flew with Debretsion to Thailand and elsewhere in search of “chicks and babes”.

Debretsion could be just the tip of the TPLF global whorehouse iceberg. I can imagine why they would want to stonewall any information on their secret global prostitution ring. But the truth will come out in bits and pieces as they rat each other out.

That is why Debretsion needs to come clean and publicly admit or deny the allegations, or alternatively make a public apology and slither back under the rock from which he came.

On a lighter note, if Abebe’s report is true, John Debretsion missed out on the biggest sex adventure of his life.

Vlad Putin recently said, “Our prostitutes are undoubtedly the best in the world.”

Maybe on your next round, John John!