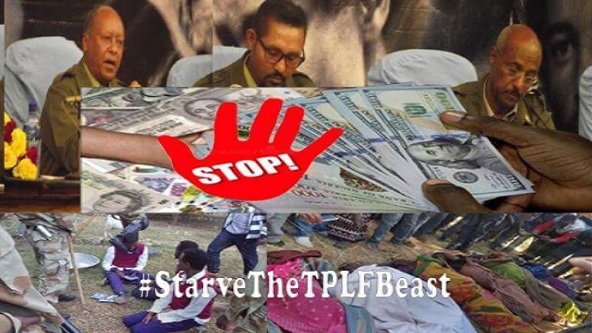 Ethiopians living in the diaspora who are oppose Ethiopian government on grounds of recent orchestrated ethnic violence, decades egregious gross human rights violations and rampant corruption which enriched members of TPLF leaders and their associates are organizing a campaign to resist the regime economically.

Reports from Ethiopia over the past two weeks indicated that foreign currency reserve at Ethiopian National Bank in only $700 million and the recent currency devaluation which was predicated on the notion of promoting export proved to be a failure. Foreign debt is pilling up,too,as the regime is excessively borrowing money for infrastructure “projects” – an item that was reportedly discussed with Ethiopian officials when IMF director,Christine Lagard,visited Ethiopia in December last year.

Relentless and resilient popular protest across most parts of Ethiopia for over two years now has crippling effect on the tourism industry from which the regime gets significant foreign currency and cash flow. Countries in Europe and North America have been issuing travel advisories to their citizens. Last month a German tourist was killed while hiking in Ertale district of Afar region of Ethiopia.

If the campaigns to deny foreign currency out of remittance is orchestrated very well by Ethiopians, already brainstormed, it could deprive the Ethiopian government up to $350,000,000 million dollars a month. An estimated of three million Ethiopians live abroad including in Europe, North America and Australia.

A report by ministry of foreign Affairs revealed last year that revenue from remittance surpassed Ethiopia’s export earning. In 2016, Ethiopia claimed that it collected over $ 4 billion in remittance.