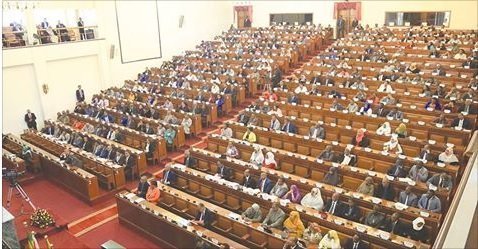 A considerable number of Ethiopian parliamentarians are boycotting regular parliamentary sessions,according to a report by The Ethiopian Reporter.

They are mainly drawn from two of the biggest parties in the ruling coalition EPRDF; Amhara National Democratic Movement (ANDM) and Oromo People’s Democratic Organization (OPDO)

They have demanded Prime Minister Hailemariam Desalenge to appear before parliament to explain growing ethnic violence in the country and the killings of innocent civilians in the south eastern parts of the country.

Deployed federal government forces have also attacked students in university campuses in North Western and Central Ethiopia following student protest over the killing of a student from Gojam by a group of radical ethnic Tigreans in Adigrat University, Tigray – which is the ethnic political base of Tigray People’s Liberation Front (TPLF). Habtamu Yalew Senshaw, who was pursuing management undergraduate degree at Adigrat University was thrown to his death from students’ building at Adigrat University.

The ruling party,EPRDF, is composed of four ethnic based parties. There has been allegations that (TPLF) has been dominating over federal structures and keys sectors including in the security apparatus and senior military positions while it represents less than sixty percent of the entire population.

Amhara and Oromo people are the largest langue speaking groups in the country and members of parliament from these regions constitute well over 60 percent of parliamentary seats.

Ethiopia is still in a state of political crisis as many town across Oromo region are protesting the killings of civilians in Chelenko, in Hararge.

Information emerging in social media indicate that there is apparent tension and fear in the ruling party that a protest could break out in the capital Addis Ababa. One of today’s street protest was in Dukem, just a few kilometers from the outskirts of Addis Ababa in the south east direction.

The boycott by Ethiopian Parliamentarians is unprecedented in the history of the ruling party which has been in power for nearly twenty seven years now.