Hailemariam Desalgne belatedly says if the situation in Ethiopia is not resolved, it poses a threat to the existence of the country 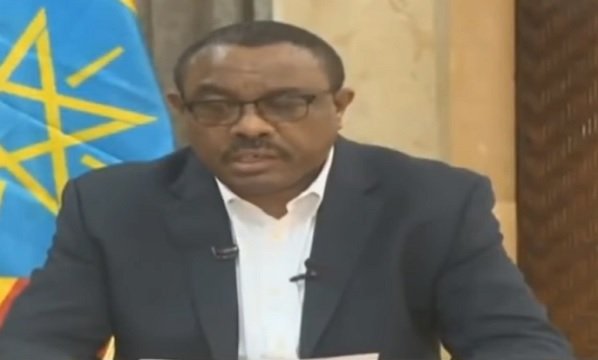 Prime minister Hailemariam Desalgne appeared on State television today to read out a statement he issued regarding conflicts in Hararge (South Eastern parts of Ethiopia), Borena, Bale, Guji and in some universities in Tigray, Amhara and Oromo regional states of Ethiopia.

In his statement, he noted that renewed conflict in Oromo-Somali regions of Ethiopia caused the death of innocent civilians and for the destruction of properties.

He also highlighted the security problem that led to the death of students in Adigrat, Woldia and Wollega Universities, and the introduction of curfew in universities due to security concerns of students. In that regard, he added that Federal, regional and university authorities, as well as elders, have been working together to resolve the situation and he claimed that it has been possible to resume teaching-learning process, a statement that does not seem tally with the realities on the ground in many universities.

Expressing condolences to the victims of the attacks in the west Hararge zone, he stated that the government has formed a task force to investigate the killings ( apparently a reference to the death of Somali Ethiopians and Oromos.) Once the investigation is completed, he added, the government will disclose the outcome to the public in detail and will “take measure.” Furthermore, he said that unless the situation is resolved immediately, it could pose a threat to the country. He was critical of the role of media and warned that his government will go after those who aggravate conflicts.

As is often the case, Hailemariam Desalgne statement met with rejection and ridicule from activists and politicians in the opposition quarter. It is no secret that Hailemariam Desalenge is widely seen as TPLF’s puppet and a prime minister with no power of his own.

Watch him reading out his statements in the video below :


___
Join the conversation. Like borkena on Facebook and get Ethiopian News updates regularly. As well, you may get Ethiopia News by following us on twitter @zborkena