Ethnic violence on the rise in Ethiopia 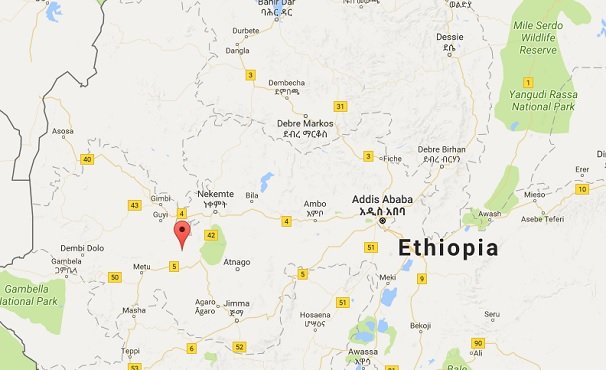 As pundits on Ethiopian politics are activating alarm bell about impending dangers of ethnic politics, ethnic violence is already consuming Ethiopia and spreading across the southern parts of the country.

Several Ethiopians of Amhara background are killed in a fresh ethnic-based attack in Buno Bedelle, Illubabor zone of Oromo regional state in south-west Ethiopia. Dega and Chora districts were scenes of the violence yesterday.

Addis Standard, which has been covering “Oromo protests” for years now, reported the violence in Dega and Chora as “communal violence”, confirmed the news citing sources from the region who spoke on condition of anonymity. Apparently, people who were believed to be not Oromo are hacked to death – which is what happened during the horrific Rwandan Genocide in the 1990’s. The targets were Amara people.

The sources who spoke to Addis Standard on condition of anonymity are cited as saying anti-government protest started “via cell phone messages sent out to many receivers calling for a protest against the recent displacement of Oromos from the Somali regional state,” and then “The protest quickly degenerated into fighting, then some young people started to go around killing people and burning houses.” The anonymous source, apparently male, added that “many of those who were killed and whose houses were burned down were ethnic Amharas.”

Communication Head of Oromo regional state, Addisu Arega, confirmed that there was violence in the above mentioned parts of Ethiopia and said that “eight Oromos and three Amharas” were killed during the violence.

Amhara activists who broke the news of ethnic violence in Illubabor yesterday did have a different figure of Amara victims. Muluken Tesfaw, who has authored books on the killings of Amhara – he currently runs Brana media, wrote yesterday that at least 20 Amhras were killed with a machete and disclosed the lists of six of the victims. Like Addis Standard, he cited sourced from the region.

Apart from the death of innocent civilians who are leading a subsistent farming lives, coffee farms and property were destroyed.

Addisu Arega blamed the violence on “rent seekers who are not happy with the revival of Oromia region leadership and its commitment to stand in guard of public interest and against rent-seekers who plunder resources in the region.” He added that it is intended to disorient the leadership and destabilize the region and the country. Without specifying details, he noted in his social media update that those who initiated the violence are in custody. On the other hand radical ethno-religious Oromo nationalist activists like Jawar Mohammed who are based abroad are now distancing themselves from the protests and that they did not call them.

This is the second major ethnic conflict in Ethiopia in less than a month. More than a million Ethiopians of Oromo speaking background were displaced from Somali region and at least fifty killed last month.

There have been several ethnic-based acts of violence in Oromo region of Ethiopia in the past. And this is not the first time for Ethiopians from other language background are attacked. Clearly, radical ethnocentric and ethno-nationalist sentiment is stronger in the region so much so that Ethiopians from other language origins who lived in that part of Ethiopia for generations are seen as outsiders and colonizers.

It is not to be disputed that radical activists based abroad put a lot of effort and resource in nurturing radical ethnonationalism in the region. And they had a remarkable success in terms of putting a flawed narrative of Oromo oppression on international media outlets. Who is covering the colossal funding for that is a question that many do not seem to deal with.

What many seem to agree with is that conducive conditions for current ethnic violence are laid by the ruling Tigray People’s Liberation Front -which actually looted resources from different parts of Ethiopia using its henchmen. There has been ethnic violence in Gambella region as well.
___
Join the conversation. Like borkena on Facebook and get Ethiopian News updates regularly. As well, you may get Ethiopia News by following us on twitter @zborkena