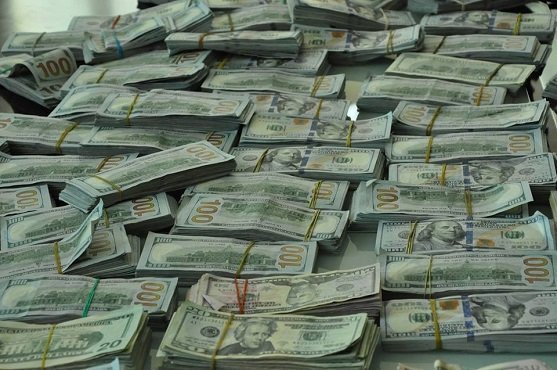 Ethiopian state media (EBC)reported that a court in Oromo region of Ethiopia sentenced two individuals who were caught in possession of over half a million US dollars, allegedly for illegal circulation in the border area, to prison terms.

The report identified the individuals as Habane Arab and Ahmed Mohammed.

They were caught with 541,771 US dollar in the border town in Bordode zone of Harer, South Eastern Ethiopia.

The individuals are sentenced to eight years in jail with no parole. In addition, they were fined 100,000 Ethiopian birr each.

The recovered amount of USD 541, 771 is deposited to an account opened to help out people displaced from Somali regional state.

It is to be recalled that more than 500,000 Oromos are dislocated for reasons of security concern and forced evictions following attacks by deployed special police (Leyu Police), according to reports from social media sources and the regional government.

Those captured are from southern peoples nations and nationalities, from Amhara region and from Addis Ababa city, added Addisu Arega.

From different Ethiopian media and social media reports, at least ten people are killed in the past two weeks and more than 10 vehicles are burned.

Some Oromo activists, for example Jawar Mohamed – as he told the VOA Amharic service, trade accusations that they did not call the protest. Nor the qeerro called the protest.

The regional government is also saying that some of the protests were not authorized and there seem to be no clarity as to who called the protests.

Protestors, however, were clearly calling for an end to the TPLF administration level while they seem to have shown sentiment to support the leadership of the regional government.

There protests are still going on in some parts of the region.
__
Join the conversation. Like borkena on Facebook and get Ethiopian News updates regularly. As well, you may get Ethiopia News by following us on twitter @zborkena