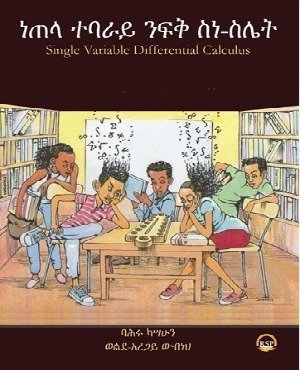 …this book builds upon the mathematical-conceptual foundations for science and engineering laid down by “Mathematical Preparations for Physics”, published by Addis Ababa University Press. To this end, after brief reviews of Algebra and Trigonometry, it expands on the concept of functions. It then introduces the limit, the foundation of differential calculus. It introduces the concept of rate of change with the aid of limits, the slope of a straight line and simple geometry, from which it transitions to the slope of a generalized curve and introduces and expounds the major concept of the derivative. It demonstrates the application of the derivative in various disciplines by providing over two-hundred and fifty fully solved examples.

Writing this book required the translation of several words. The authors have tried, to extent possible, to draw from the Amharic language. They have, however, preserved words derived from proper noun (such as Algebra) or words like “zero” that are already assimilated in Amharic. Some of the objectives of the book are: (1) to expand education and its accessibility, (2) to nurture cultural and linguistic growth, (3) to preserve Ethiopia’s long existing scientific and engineering skills, (4) to dispel the erroneous belief that Amharic lacks both mathematical and scientific capabilities, and (5) to encourage other authors to write Amharic textbooks. In the preparation of this textbook, the authors have drawn from the rich and ancient technologies in existence since time immemorial. They have drawn from ancient Ethiopian crafts such as ceramics, horn lathing, silver and gold smith works, weaving, defense strategies, religious texts, business, children’s games, astrology and numerology, magic art, and even insults for possible source of technical and mathematical terms. As the Amharic saying goes “if genuinely sad, tears flow naturally”; if so desired, one can write mathematical and scientific books in Amharic. The only thing stopping us is our own weakness!