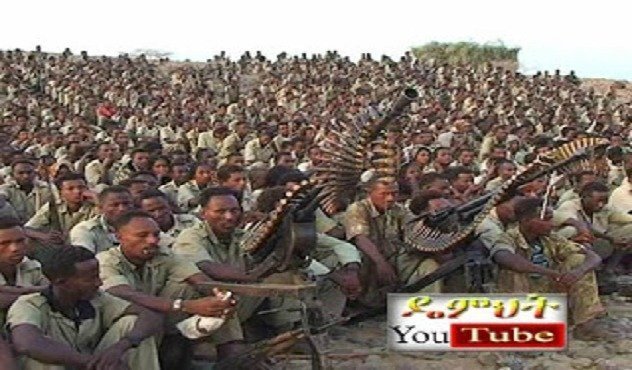 Two political statements this week from two different political organizations, one from within the nominal ruling coalition, Ethiopian People’s Revolutionary Democratic Front, and the other from Tigray People Democratic Movement(also known as Demhit) – presumed to be rebel force based in Eritrea – fundamentally spoke same TPLF political slang but from different stand points.

Tigray People Democratic Movement – which, as per official reports by media in the Ethiopian opposition, is said to have at least twenty thousand fighters –issued a press release. The statement came following celebration of its sixteenth birthday in this Ethiopian month of Yekatit (TPLF was born in the same month)

The substance of the statement appears to be, partly, a call for opposition parties and Ethiopians to work together. And partly TPLF style rant with similar characterization of perceived attack, rather a manufactured non-existent attack, on Tigrians – which TPDM vowed to fight with same rebellious fervor that it has, well it claims, against TPLF. The characterizations employed descriptions like “chauvinism and narrow nationalism” – which profoundly informed TPLF formulation of state of emergency legislation.

Without forgetting that majority of Ethiopians are at least skeptical of whether TPDM is, as is the case with Arena Tigray, really fighting against TPLF – the tendency was fostered by “defection” of a contingent of TPDM fighters under the leadership of its chairman, Mola Asgedom –, TPDM’s belated claim about ethnic based attack against Tigrians begs for scrutiny. There is a reason for that.

There was a sort of investigative report by Wazema radio that seem to suggest that the alleged attack on ethnic Tigraians in Gonder was a politically motivated and melodramatically staged plot with dual purpose; to maintain loyalty of Tigraians for TPLF during a time that appeared to be uncertain and to set the stage for a large-scale government terror against Ethiopians in Gonder and Bahir Dar regions -among other places.

What followed in Tigray was something that looked like a preparation for ethnic war so much so that authorities reportedly armed even elders. Clearly, TPLF was interested in the political fear factor in Tigray as a tool to maintain loyalty to make sure that it is not isolated even in Tigray. From that view point, Tigray People Democratic Movement rhetorical queue after TPLF to condemn something that never existed is rather a disservice to itself -if it is really fighting TPLF as it claimed.

Internally, in what seem to be rather a patronized reassurance of oath of allegiance, Amhara National Democratic Movement (ANDM) is accusing its own members and a section of ANDM leadership of chauvinism. ADNM, as per Sendek report, regret that its members were at some point skeptical, clearly seem to assume that they are not now, towards TPLF.

The way these ANDM members acted on the question of Wolqait –which, to ANDM top leadership, was none of ANDM political business – is on the list of indictments with which the allegation of “chauvinism” is explained. Perhaps, this may mean purge and/or possible arrest within ANDM. The time is right for TPLF to act indirectly as it seems to have restored, at least on a temporary basis, its control over structures in different regional states including Amhara. ANDM’s defense of TPLF went to the extent of theorization of the nature of man in light of “revolutionary democracy” – which will not obviously explain sentiments and affiliations in Tigray. It is like TPLF is playing two ideological tools interchangeable as part of its strategy to maintain its power. Within the “ruling coalition,” it plays revolutionary democracy card to discipline member parties in a way to make serve TPLF domination of power. In its ethnic base, region it has always been nurturing chauvinism and ethnic supremacy of Tigran’s by painting a picture that the sky is the limit for Tigray if they are to stick to TPLF.

That is why Amhara National Democratic Movement and Tigray People Democratic Movement seem to be misplacing allegations of chauvinism. If there is real concern about chauvinism, it should not be hard to imagine that it could be more disastrous in a place where there is access to all forms of power. In that regard, what is dangerous is the kind of chauvinism that exists within TPLF and its support base in Tigray.

Cover Photo Source : Social Media
___
Join the conversation. Like borkena on Facebook and get Ethiopian News updates regularly. As well, you may get Ethiopia News by following us on twitter @zborkena