South Sudan is not Afraid of Ethiopia… 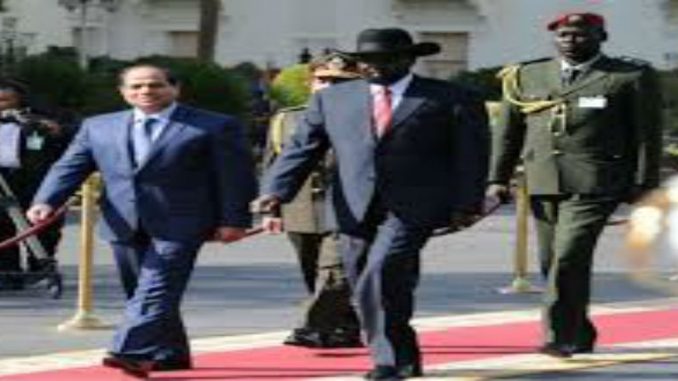 South Sudanese officials have stepped up rhetoric against Ethiopia in what analyst see as a moment that is developing in the relations between the two countries with a government official at the ministry of information in Juba telling a reporter that his government was not afraid of Ethiopia.

Ethiopia has been looking at Kiir’s government in Juba with a second thought lately over South Sudan’s embracement of Egyptian government policy towards the Ethiopian Dam and the Nile water agreement.

An official who is a close aide to the information minister Michael Makuei has said the government of South Sudan was not afraid of Ethiopia and that the country had nothing to explain, adding that the country would press on with its strategic relations with Egypt.
[adToAppearHere]
“it’s a normal practise to look out for your own interests, all countries do that……. we are ‘not afraid’ of any country, be it within the region (Ethiopia) or beyond, i think our ambassador in Addis Ababa made it clear to them on Ethiopian Broadcasting Television that we do not have to explain anything on our diplomatic relations with other countries” said Atem Deng Makuac an official at the ministry of information in Juba

This Comes just a day after the South Sudanese ambassador to Ethiopia was summoned on the national television the Ethiopian Broadcasting Cooperation (EBC) to explain president Kiir’s recent visit to Egypt and to dispel recent rumours that South Sudan and Egypt agreed on a “dirty deal” over Ethiopia’s building of a mega Dam on the river Nile.

The official said the government in Juba would not back down from any deal with the Egyptian government due to their long standing relations.

“…..Other countries cannot force us to rethink our relations with Egypt, Egypt has supported South Sudan in many occasion,….you know it, about their support for our irrigation system, no country in the region has done that, ok? Said Atem Deng Makuac a close aide to the information minister

Atem said Egypt has offered opportunities to South Sudanese, he warned that Ethiopia cannot force or threaten South Sudan because the national interest of the country comes first above anything else.

“They have given scholarships, they are offering other security support now…..we cannot be asked to stop cooperating with Egypt be it on the Nile water issues or whatever…..those who are not happy have to rethink” Atem Deng added

President Salva Kiir visited Egyptian capital last week in a surprise invitationn by his Egyptian counterpart Al Fatah Al-Sisi were they discussed bilateral relations and agreed to work together to support Egypt in it’s campaign on building dams on the Nile river. According to Middle-east news sources the two president’s of Egypt and South Sudan agreed on a “dirty deal” to block or sabotage Ethiopian plans to build a dam on the Nile river.

Egypt which has been accused by Ethiopia of entering in it’s internal affairs by supporting opposition groups and rebels inside Ethiopia is said to have joined forces with South Sudan’s president Kiir and Uganda’s Museveni to isolate Ethiopia regionally and use several means to force Ethiopia to stop building its new mega Dam on the Nile river.

South Sudan government has always suspected Ethiopia of offering indirect support to the rebellion that has engulfed the country, while Ethiopia is said to be suspicious of South Sudan’s new close cooperation with Egypt.

When asked if the government would talk to the Ethiopian government to explain itself about the recent visit by president Salva Kiir to Egypt recently, Mr Atem replied that there was nothing to explain.

“South Sudan does not owe anyone any explanation…what did we do wrong?” Atem told the reporter.

For more information about this report, please check Nyamilepedia