Discrimination has long been a problem in Israeli society - will these protests change anything? 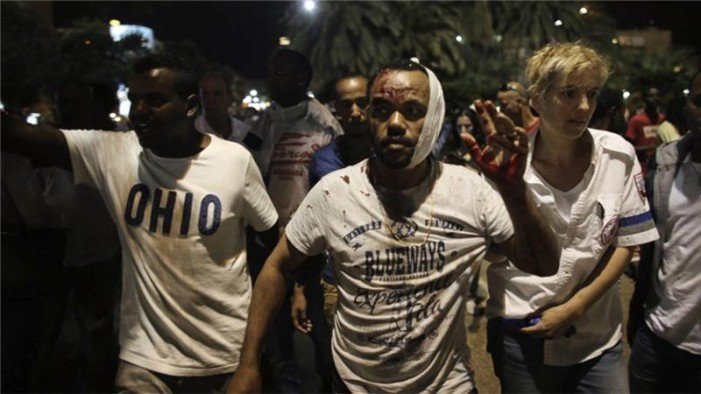 “My blood is good enough for army service, but not good enough after,” shouted a woman at a line of riot police last Thursday in Jerusalem.

“My brother is in Golani [an army unit] and so was I, but I can’t get a job; I face racism when I want to move into an apartment,” said another man in Tel Aviv on Sunday night.

They were two voices out of thousands who turned out for two massive, unprecedented, and at times violent, protests against racism and police brutality in Israel.

In scenes that seemed more reminiscent of police dispersing Palestinian protests in the West Bank, stun grenades and armoured vehicles with water cannons were deployed, along with legions of police wielding truncheons to remove protesters.
Ethiopian Israelis rally against alleged police racism

It is a momentous point for Israeli society, to see a community that for years has been a mostly silent and tiny minority (around two percent of the population) coming out in the capital city and Israel’s hi-tech metropolis, to block roads and struggle with the police.

The chants of the Ethiopian protesters were also unexpected from a community that often votes centre and right wing.

So what happened in Israel? Did “the West Bank reach Tel Aviv”, as 972 Magzine’s Mairav Zonszein noted on Facebook? Or is this “Israel becoming like Baltimore” as protesters told one newspaper.

The immediate trigger for the protests was a video that emerged on April 27 showing two Israeli policemen in an unprovoked attack on an Israeli soldier of Ethiopian origin. For many Jewish Israelis, the army is a sacred institution, often seen as among the most trusted in a country that is suspicious of government and politicians. For police to beat on a soldier was a trigger like the death of Mohamed Bouazizi in Tunisia, it was seen as such a red flag that symbolised years of pent up anger over discrimination.

It is a reminder that in January 2012, Jewish Ethiopian protesters marched on the Knesset (Israel’s parliament) decrying racism.

“Black and white are equal,” they said. But few listened. During the last government, Knesset member Pnina Tamano-Shata, who was one of two Ethiopian members of the Knesset, often clashed with governing institutions over racism. She raised the issue of why blood donations from Ethiopians are disallowed by health authorities by publicly attempting to donate blood.

It was revealed that Israeli authorities working with Jewish immigrants in Ethiopia had provided them with long term birth control often through pressure or not informing women of their choices. A shocking report revealed that over 40 percent of Ethiopian men serving in the army were being sent to military prison during their service.

The picture painted was of a broken society and a cycle of discrimination and poverty that was locking Jewish Ethiopians in poverty-stricken neighbourhoods in the “periphery” or towns outside the centre. Most of the Ethiopians who came to Jerusalem and Tel Aviv for the protest were Israeli born, not new immigrants.

They had served in the army (all Jewish Israelis are subject to a national draft), some had even served in various police units. They had fought in wars, and frequently referenced this in their discussions with those who asked them why they had come.

But for them army service was economically distressing. Most soldiers are paid around $100 a month for three years. For those from poor families it means they can barely afford a mobile phone bill. Some end up working part time while doing army service full time. And when they show up late or must leave for economic reasons they are sentenced to military prison for being “absent without leave”.

Incarceration rates for those under the age of 18 also rose, so that Ethiopian Jews make up 30 percent of those in juvenile detention.

Racism in Israeli society has a history going back to the 1950s in which each immigrant group and the local Arab minority is seen as “outsiders” by a mostly European Jewish elite. Even in the last elections, Jews from Arab countries were called “neanderthals”. Ethiopians, although portrayed as friendly loyal citizens in mass culture, are stereotyped as uneducated and primitive; expected to take on the lowest jobs and often shunned by elite schools or society.

The arrival of non-Jewish African migrants, fleeing wars in Africa, in recent years exacerbated the Jewish Ethiopians’ situation as they felt the need to prove their “Israeliness” more in a Balkanised society that views outsiders with suspicion.

When the video emerged and 1,000 Ethiopians came to Jerusalem to protest, they didn’t find any support from mainstream politicians. Not one Knesset member came to support them, and the usual groups on the left that speak about racism in society ignored them.

The police showed restraint as these young men and women blocked the major north-south route in Jerusalem and occupied an area near the prime minister’s residence. But the relative quiet of the Jerusalem protest became a melee in Tel Aviv. It wasn’t Baltimore, almost no property was damaged, and it wasn’t like Palestinians protesting, where tactics against them are more harsh.

But it did force Israeli society to look in the mirror and realise a group that has been the most supportive of the country has decided that they won’t accept the situation any longer.

Discrimination has long been a problem in Israeli society; whether against Palestinians, Jews from Arab countries, Russian immigrants or ultra-orthodox Jews. Ethiopians have shown they can get the public’s attention; but whether they can change entrenched trends in society is less likely.

Seth J Frantzman is a Jerusalem-based commentator on Middle East politics and has lectured in American studies at Al-Quds University.

The views expressed in this article are the author’s own and do not necessarily reflect Al Jazeera’s editorial policy.

Check Aljazeera for more information about this article.