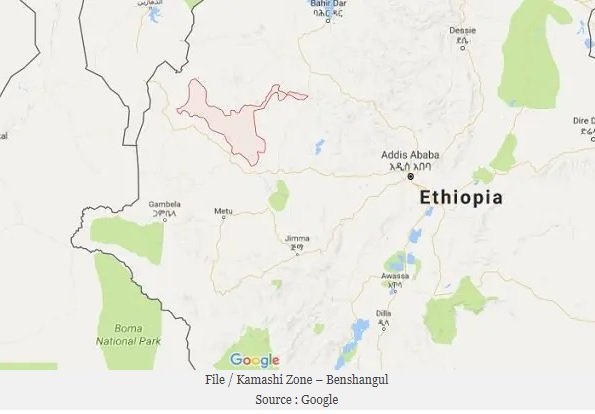 As central government carries on law enforcement operation in the Tigray region of Ethiopia in the north, Benishangul Gumuz region continues to be a place where innocent civilians are slaughtered

According to a report by DW Amharic on Tuesday, “unidentified gunmen” killed at least ten people in the Debate district of the region. The incident happened on Sunday starting 10 a.m. local time. Many of the victims are said to be daily laborers who were  in their workplace.

The source added that they were killed when the gunmen opened fire.

Residents of the kebele where the incident happened in Debate district reportedly said that there are missing people whose numbers are unspecified. Some are believed to be kidnapped while others disappeared from the district fearing for their lives.

Meanwhile, The Command Post of Emergency measure in the Metekel zone of the region claims that it has eliminated at least 23 anti-peace forces — as it called them.

There have been recurring incidents of killing innocent civilians in Benishangul Gumuz region at least for the past two years. However, it has been happening more frequently since September of this year. Based on reports so far, most of the victims are ethnic Amhara who depend on subsistence agriculture or daily labor jobs for their livelihoods.

In the past two days, there has been rage and anger, as seen from social media, among many Ethiopians that the region’s president, Ashadly Hassan, is not doing enough to stop the attacks. Some go to the extent of seeing possibilities that the region’s president himself is a party to the perpetrators of the attack — whom the government describe as “unidentified gunmen.”

And there is a call for the government to take decisive action to enforce law in the Benishangul Gumuz region of Ethiopia too.

Amhara regional state police commissioner, Abere Adamu, told  journalists this week that the region has been asking the Federal government for permission to dispatch law enforcement forces to the region to decisively deal with the security crisis in the region.

The Ethiopian government has admitted in October that some region and zone level government officials had involvement in the massacre in the form of facilitating it.