Nile River is “taker of life”, say Egyptians but not with Grand Ethiopian Renaissance Dam

Previous article entitled, “Grand Ethiopian Renascence dam (GRED) is a blessing in disguise to Egypt”, argued how an Ethiopia’s project, GERD, is extremely misunderstood by the very beneficiary of it. The project mainly aimed at harvesting cheap and clean energy has a great potential to offset Egypt’s dire energy deficit and addictions to fossil fuel and other non-renewable and non-eco-friendly energy sources. GERD exploits the unique topographies of Ethiopian highlands to exploit the energy resources and advance benefits of mutual growth and peaceful coexistence. The project envisages to bring much needed economic development that will alleviate energy insecurity, poverty, and economic hardship. Hence, pleaded to Egyptian authorities to stop activities to sabotage the project and instead support what is unarguably catalyst to regional interdependence, peace, energy independence and economic development.

Egyptians refer to Nile River as not just a giver of life but also taker. This is owing to the Nile river’s flood giving life by providing fertile soils and soil moisture to help grow agricultural and food production. Nile-fed agriculture is a crucial sector in the country’s economy. It supports the livelihoods of 55% of the population while also hiring 30% of the labor force and bringing a quarter of the country’s foreign exchange earnings. Conversely, as taker of life, the flood destroys millions of homes and villages, acreages croplands and kills a number of human life and livestock while also causing various waterborne diseases and deterioration public health conditions.

With regards of Nile-fed agriculture, the flood also impacts land preparation, seed sowing, and other on and off-field operations. Several reports allude experiences of Egyptian farmers enduring flood hazard during the stream peak flow, between July and August. Flood wash-off crops and thereby significantly reducing farmer’s net harvest. It also causes a waterlogging condition and poor soil aeration, where their farmers have to wait for the land to dry before commencing any land preparation and crop planting, which means reduced crop calendar or shorter available days of growing season. Or else put up with additional production cost of stretching drainage system to drain excess water on top of the regular cost of land preparation and crop husbandry practices.

Flooding is a hydrologic event of inundation, which occur when rivers overflow their banks into surrounding floodplains or even further uplands. Under natural condition, flood is good for the health of riparian ecosystem, as it is a process that brings moisture as well as nutrient to lives of this ecosystem. In this region, it is normally caused by intense rainfall. Flood can occur slowly and builds itself up over time, especially when the rivers are having large catchment areas. However, it can also occur abruptly in response to torrent, heavy and intense rainfall. And also depending on the kind and level of damage it produces, flood can be major, moderate and minor. 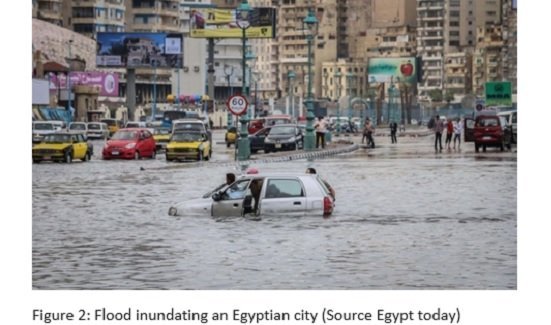 A condition for abrupt and catastrophic flood formation is looming in Nile river basin. Frist, rapidly growing Ethiopian population will only intensity the watershed’s Land Use and Land Cover (LULC) changes. Secondly, United Nation Intergovernmental Panel on Climate Change (IPCC) forecasts an extreme heat and heavy rain for Ethiopia. Climate change rises atmospheric temperature to hold more water than it usually does to eventually dump them in the form of heavy and prolonged storms. Additionally, the watershed’s LULC change characterized by urbanization, deforestation, and extensive cultivation would increase flood frequency and severity, because of impaired soil infiltration and lower evapotranspiration. Therefore, climate change together with changed LULC, a catastrophic flood hazards is forecasted on downstream countries. Already, the average discharge of Nile River is about 2830 cubic meters of water per second, unless it is dry season when it can go to as low as 552 cubic meters per second. However, during the peak season discharge can grow as high as 8212 cubic meters per second; nearly 4 and 16 times higher than the average and base flow rates.

According to National Geographic, a flood damages an estimate that worth $3 trillion dollars worldwide. In China, millions of people have been killed by flood over the last century. In United States, where flood prediction and prevention methods are well advanced, flood still causes a damage that amounts to $6 billion and death of 140 people every year. For Nile basin’s downstream countries, where such flood forecast and mitigation strategies are not fully developed, though not property enumerated, flood damages are understandably higher. There are estimated 15million people settled in major cities on the floodplains. Most settlements are made by draining wetlands, the ecosystem meant to buffer hazardous effects of flood. Therefore, risk for catastrophic flood will inevitably continue destroying villages, and killing the lives of numerous human and domestic animals.

Egypt’s strategy to cope with this flood problems has been to increase the height of Aswan dam higher and higher. However, this strategy would make excess water inundate the neighboring desert lands, thereby increase the size of Lake Nasser. This will would encroach into the land of Sudan in north and cause transboundary flood on Nubian’s land and while also exuberating evaporative lose. Aswan Dam is already hallmark of inefficient water use as its reservoir is built in the middle of a desert, where evaporation loss is extremely wasteful. According to some estimates, 10 – 15 billion cubic meters is water is lost through evaporation from Lake Nasser (i.e., Aswan Dam reservoir) per annum. This is up to 12-18% of the overall water budget of the basin and 55 – 81% of the share of Nile water allocated for Sudan to use as per 1959 Nile agreement.

GERD can help trap this torrential flood and its impacts thereof, not just on Egypt but downstream cities, especially of Sudan. Like what any sitting water (wetlands) would do, the reservoir of GERD would be checking the momentum of the torrent, absorbing its kinetic energy and then releasing it slowly. Egypt must engage, even financially support, Ethiopia to build a GERD and participate in this shared downstream flood mitigation program. Raising the wall of Aswan dam will exuberate the loss of an already meager water resources, which is reckless water use policy. It doesn’t account the growing Egyptian population, and increasing reliance on Nile River water for unforeseeable future. Millennium Lake’s is a better bet. It will have relatively higher volume to surface ratio due to unique topography and hence endure lower evaporative loss, which generating much needed energy. The cost of water (i.e., evaporative loss) associated with GERD is estimated as 2 – 3 billion cubic meter per annum, which 500% lower than the evaporation loss from Aswan Dam. It is with this better hydrologic responses, and potential of flood mitigation that the article has argued, Nile River is “a giver not taker of life” with Grand Ethiopian Renascence Dam.