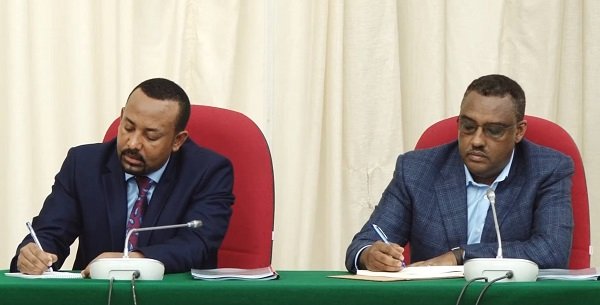 This past meeting was unique in the history of the organization in the sense that leadership from parties formerly known to as “sister organizations” from regions ranging from Benishangul region to Ethio-Somali and Afar regions have taken part in the meeting on equal status terms with the four major parties that constitute the ruling coalition erstwhile.

It was also unique in the sense that the council officially reached an agreement, among all member parties, that anarchism, radical ethno-nationalism and problems related to rule of law are posing a threat to national unity.

As well the party council evaluated implementations of plans approved during the last party congress and current national affairs.

As is the case always, what was the agenda discussed during the meeting and the positions the parties held on a number of political, economic and social issues is unknown for the meeting is still confidential.

Public knowledge of the agenda discussed during the meeting is as little as the statement that the party released which some analysts say is very political crafted in a way to conceal differences in the party.

In the statement, the party said that there are hostile forces attempting to reverse the reform measures that Prime Minister Abiy Ahmed’s administration has been undertaking for a litter over 12 months now. And an agreement has been reached, according to the statement, to “join hands and fight them bitterly.” However, identities of the hostile political forces are not revealed.

Enforcing the rule of law is also something that the party is vowing to work on more seriously. More than three million Ethiopians have been displaced due to ethnic-based violences in different parts of the country.

As well, the statement disclosed that the party has evaluated political, economic and foreign relation matters, among other things, and there seem to be an agreement that positive results have been achieved in these areas and the party vowed to work on it further.

In terms of the economy of the country, the party claimed that the economic reform measure helped improve currency crunch but identified that shortage of foreign currency, high rate of unemployment and debt payment issues are identified as major challenges.

Politically, EPRDF said that successful work is done in terms of broadening the democratic space in the country.

Also, the party evaluated positively foreign relation in the neighborhood especially with Eritrea and decision is made to continue in the direction of promoting mutually beneficial relationships in the region.