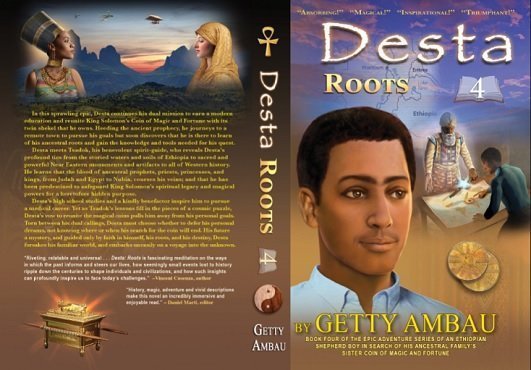 At its heart, Desta: Roots is the story of a boy of humble origins who finds his way in a hard world by his wits and grit: a Dickensian premise that has stood the test of time. But author Getty Ambau here tackles a breathtaking scope of subject matter that would give most authors pause. Three-thousand years of Egyptian, Jewish, Nubian, and Ethiopian history and culture; applied physics, genetics, and hydrology; numerology; and a heady dose of magical realism are all woven into a narrative with an authenticity and inevitability that illuminate the very origins and course of Western civilization.

Given the adolescent Desta’s odds and obstacles, the constant disappointments and betrayals, what is most astonishing is that he gets anywhere at all, much less propels himself, sometimes literally on wings of his own devising, forward in his education and in pursuit of an ancient magical coin–two quests constantly competing for his attention, each threatening to upend the other at key junctures in Desta’s progress. Just as he is doubting his path, Desta acquires a new ally in Tsadok, a spirit-guide who reminds him of his purpose, and reveals the hidden skeins that join Desta’s life with figures pivotal to Western history. Ambau makes such fantastical events seem plausible, almost quotidian, in his protagonist’s life.

Anchored by these revelations, Ambau’s Desta grasps that his journey requires self-reliance, because life offers no free lunch–sometimes literally. In one telling passage, Desta, living alone and struggling to make ends meet, reluctantly accepts charity meals from a local school, but finds that the expected payback in slavish physical labor isn’t worth the meager handout of leftovers. So instead, he lifts himself from his Oliver Twist-like existence by teaching, tutoring, and leading tours for foreigners. His own hard work provides the means to pay his way, hire a cook, and still manage to garner top grades in school.

What makes this feel not mercenary but heroic is that Ambau succeeds in portraying Desta as a young man of heart and conscience. In the story’s turning point, Desta, now a high-school graduate, must choose between two futures, either one of which will snub a beloved benefactor, while neither offers a clear path in his education, or to reunite the two coins of magic and fortune. As Desta agonizes with his choice, Ambau makes Desta’s bodily afflictions seem a natural manifestation of the inner turmoil of his dilemma.

Ambau deftly brings this fourth installment of the Desta adventure series to its surprising close, while setting up the tension for what’s to come. By the end of this fourth volume, Desta, wise beyond his teenage years, has acquired the spiritual ballast to further his quest on a far larger stage. With forgiveness of the wrongs done him, gratitude for the corporeal and intangible souls who have aided him, and a profound sense of his origins, place, and destiny in human history, he sets off for horizons wider than any he imagined when his story began. This wise and compassionate novel offers a lesson in faith and determination worth heeding, a philosophy to chart a life by, and an adventure any reader would be well advised to take.

Reviews
• Desta is a tale of impossibility and inextinguishable dreams. In fact, Read more
• Many of us who grew up in the 1960s and `70s had coming-of-age epipha Read more
• Desta’s journey continues to inspire us. His unwillingness to accept failure Read more
___
Editor’s note : Should you like to feature your book on borkena (of course this is a community service to Ethiopians in the diaspora or at home and absolutely free), please do e-mail reviews and picture of it to info@borkena.com