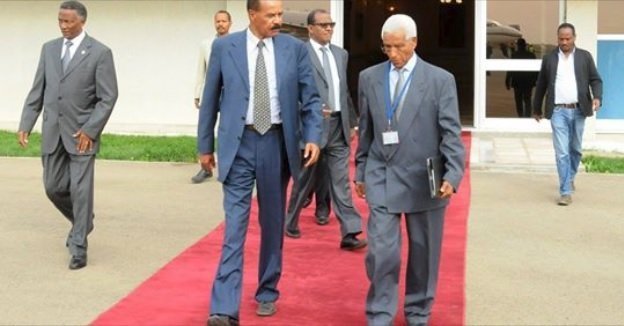 Eritrean president Isayas Afeworki is to visit Ethiopia again but his government has not disclosed exact timeline yet.

This time around his visit is focusing on Amhara region in Western Ethiopia, according to a report by Ethiopian government media (EBC).

Gondar, which is part of Amhara region of Ethiopia, used to be an immediate neighbor to Eritrea from the south west part before the incorporation of Wolkait region, which linked Gondar and Eritrea, to Tigray after 1991. People in Wolkait are still resisting that a Tigray identity is imposed on them and they are struggling to be part of Gonder with their ethnic Amhara identity.

A delegation from Amhara regional state was in Eritrea since yesterday for talks with Amhara Democratic Forces Movement (ADFM) rebel groups who have been based in Eritrea for the past eight years.

The delegates met with senior Eritrean government officials on the sidelines of talks with the rebel group and they initiated Eritrean president visit Ethiopia and Amhara region.

On his facebook update today, he disclosed that the delegation meet with Yemane Gebreab, advisor to President Isayas Afeworki, and discussed ways of fostering people to people relation. To that end, speaker of the region’s council is to lead another delegation to Eritrea before President Isayas Afeworki is traveling to Ethiopia again to visit the region, according to a statement by Nigussu Tilahun.

During his visit in July, President Isayas Afeworki visited Hawassa in Southern Ethiopia.

The delegation from Amhara regional state says the trip to Eritrea was a success. The rebels have agreed to disarm and move to Ethiopia to help efforts to develop the region and Ethiopia at large.

What is not clear at this point is whether the regional government is to integrate former rebel forces to the local militia or provide them with other forms of employment.

The Ethiopian and Eritrean government agreement to end state of war, and the political change in Ethiopia has made the Ethiopian rebels stay in Eritrea irrelevant. Consequently,all of them have agreed to operate in Ethiopia peaceful and return home.

Yet, a group like Oromo Liberation Front, which is a radical ethno-nationalist group, seem to be interested in exploiting the situation in Ethiopia differently as it is still emphasizing military activity despite agreement to embark on peaceful struggle.