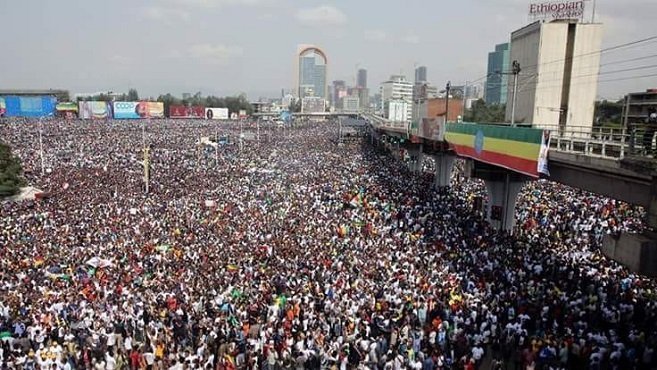 Ethiopian prosecutor announced today that it is set to sue five suspects in connection with the grenade attack of June 23 in Addis Ababa during a rally organized to support the government of prime minister Abiy Ahmed.

The suspects are identified as Abdissa Kanae, Desalegne Tesfaye, Getu Girma, Hiwot Geda and Bahiru Tolla, according to a report by Ethiopian Broadcasting Corporation (EBC).

Police claim that Abdissa Kanae, would be first defendant, was attempting to help escape suspects who were receiving medical care while Getu Girma (third defendant) coordinated the grenade attack. Police further claimed that the later has a criminal record was released recently.

The fourth suspect, Hiwot Geda (female), says police, pretended as the insane person to take part in the attack. Yet, police say she is still in mental hospital in the capital Addis Ababa.

The federal police criminal investigation team announced that it has submitted the case to the prosecutor after completing its task.

The federal prosecutor is given fifteen days to lay a charge against suspects.

Suspects reportedly told the court that their constitutional rights were violated as they were locked in a dark room which the investigation team denies claiming that no violation of their rights was committed and that it could produce audio-visual evidence.

Initially, over thirty suspects were arrested following the attack in addition to the arrest of Addis Ababa police and Federal Police authorities for allegedly creating security gaps which are believed to have enabled for the attack to take place.

At least two people were killed and well over hundreds of protesters were wounded in the attack the target of which, as some claim, was prime minister Abiy Ahmed who made a speech to a crowd that was estimated to be nearly two million.