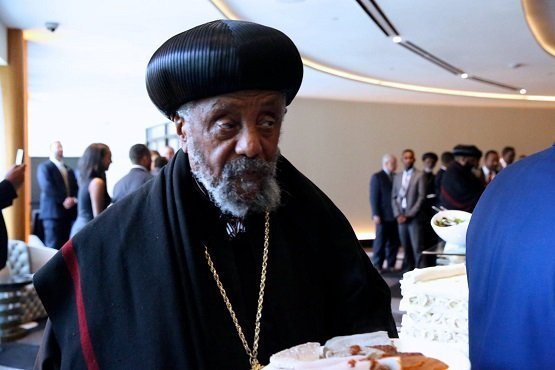 In an emergency meeting called for today, the Ethiopian Orthodox Tewahdo Church Holy Synod based in Addis Ababa, Ethiopia, lifted the excommunication of members of the Holy Synod based in the United States which was instituted soon after Patriarch Abune Merkoris’ compulsion to leave the country.

The decision of the Holy Synod was read out today mentioned that three excommunications were passed on the what used, until this week, the holy synod based in the United States; in September 1992, in September 1993 and in January 2007.

The Holy Synod that used to be based in the United States on its part lifted excommunication last week following the declaration of the reunification of the Ethiopian church after twenty-six years in a ceremony organized at the Water Gate Hotel in Washington DC in the presence of Ethiopian prime minister Abiy Ahmed.

Abune Merkorios, the fourth patriarch of the Ethiopian Church, is expected to return to Ethiopia along prime minister Abiy Ahmed, and a welcome ceremony is organized in accordance with the tradition and practices of the church. Abune Merkorios will be living in the patriarchate residence in Arat Killo and will be carrying out spiritual aspects of the patriarchate while Abune Mathias, the sixth patriarch of Ethiopia, focuses on administrative functions. What it means is, in a nutshell, is that the church will have to patriarchs at the same time, for the first time in its history, in violation of the canons of the church. However, it appeared expedient to do so in order to bring about the two Synods together. However, it is part of the agreement that the Holy Synod will never tolerate violations of the canons of the church hereafter.

Ethiopian Orthodox Church has organized another conference at the millennium hall in Addis Ababa for August 4 to herald the reconciliation. The occasion will be attended by members of the diplomatic community and prime minister Abiy Ahmed, according to a report by Ethiopian Broadcasting Corporation (EBC).