Abiy Ahmed “tear down barriers” trip a success in Washington and LA.Minnesota seems to like the barrier

Abiy Ahemd has accomplished a remarkable political success and perhaps future economic gains in his trip to the United States. Washington DC and Los Angeles were clearly a success. Minnesota appears to be still living with barrier. 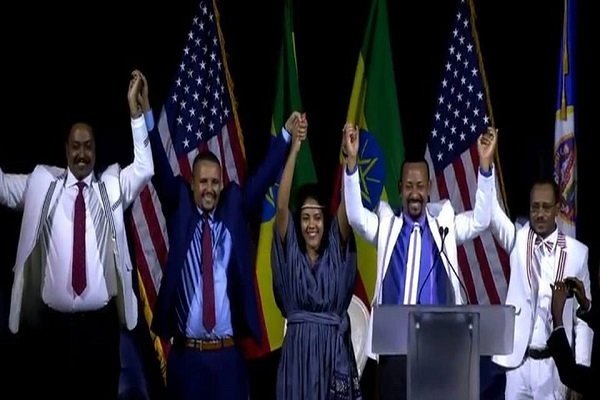 When Prime Minister Abiy Ahmed, Ethiopia’s popular leader, travel to the United States, his primary intention, as the Ministry of Foreign Affairs disclosed it, was to meet with Ethiopians abroad and discuss the ongoing change in Ethiopia and the role Ethiopians can play to support the change.

And based on stated objectives, it is possible to say that this travel to the US was a remarkable success.

The day he arrived in the United States, he met with Ethiopians in a reception organized at the Ethiopian embassy. Unlike the case in the past, Ethiopians from different backgrounds were invited to the ceremony. Yet, Prime Minister Abiy Ahmed was confronted by a lone protestor outside of the embassy who was protesting that organizers left out an important person, Tamage Beyene who has been advocating for the cause of Ethiopia for well over two decades. And the prime minister did not want the lone protester left out, approached him and took him to the ceremony with himself. His action added a positive effect to the exiting Abiymania. He also met with professionals and members of the business community.

The prime minister also witnessed a history unfolding for which he played a significant role in terms of making it happen and it is expected to have a positive impact in the realm of politics as well. Ethiopian church declared an end of schism after more than two decades.

On July 28, Prime Minister Abiy Ahmed met with 25,000 Ethiopians at Walter E. Washington Convention Centre. Washington DC mayor Muriel Bowser, who proclaimed July 28 Ethiopia Day in Washington in recognition of prime minister Abiy Ahmed’s visit, attended the meeting and mad speech. The event was, by all standards, unprecedented in the history of Ethiopians in the United States. And what makes it unique is that Ethiopians of different political convictions, including the very Ethiopians whom the Ethiopians government labeled as “terrorists” were present. The prime minister even hugged on stage Tamagne Beyene whom many Ethiopians in the Diaspora see as a sort of symbol of resistance against what used to be TPLF government before Abiy Ahmed came to power in early April 2018.

On July 29, he traveled to Los Angeles where he met with over nine thousand Ethiopians from all walks of life. With him was, apart from his wife and some members of his cabinet members, Lemma Megersa on of the most popular Ethiopian politician who is credited with the ascension of Abiy Ahmed to the post of the prime minister without forgetting the important contribution of ANDM party. Lemma Megersa spoke briefly at the Los Angeles meeting with the request of the crowd.

In the last leg of his US tour, Prime Minister Abiy Ahmed was in Minnesota today where he held a meeting with Ethiopians. Unlike the vibe in Washington and Los Angeles, Minnesota is entirely different. The city has dominant ethnic Oromo Ethiopians many of whom seem to espouse a radical ethnic-nationalist political view of the radical Oromo Liberation Front (OLF). The flag that most people carried was that of the OLF. Despite some sabotage against Ethiopians who oppose the secessionist OLF creed, there was a sizable number of Ethiopians who hoisted the historic Ethiopian flag. The motto of his US trip was to “Tear down barriers, and build bridges” and it is hard to tell where his trip to Minnesota stands in terms of tearing down the barriers that radical ethno-nationalists have been guarding with the pretext of “defending Oromo interest.”

Tomorrow, Abiy is traveling back to Washington DC where he will be meeting with Abune Merkorios, the fourth patriarch of the Ethiopian church, and then will return to Ethiopia together.

On the sidelines of his trip intended to meet with Ethiopians, he also met with vice president of the United States of America, Mike Pence, International Monetary Fund (IMF) Director, Christine Lagarde, and The World Bank president, Jim Yong Kim.

As well, he met with leaders of what the Ethiopian government used to call a “terrorist organization,” Arbegnoch Ginbot 7, Dr Berhanu Nega, Angargachew Tsige, among others. The leaders reportedly reached an agreement to return to Ethiopia to struggle peacefully for the creation of a democratic Ethiopia and for the rule of law.

Overall, his trip was, most Ethiopians tend to think, is a success especially if he builds on it. One clear gain out of it, apart from ending differences within Ethiopian church is that Ethiopians in the Diaspora are now counting on Abiy Ahmed as their prime minister and pledging to support his government politically, economically and otherwise.