Eritrean Embassy is reopened today in Addis Ababa as president Isayas Afeworki was wrapping up his three days visit. He left for his country a few hours after opening of the embassy. 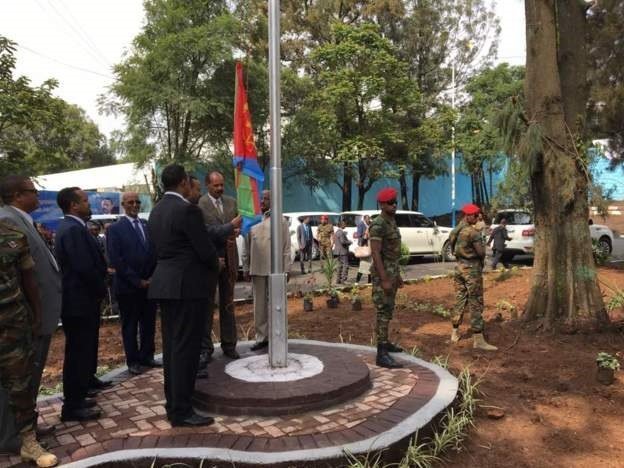 borkena
July 16,2018
As the Eritrean president and his entourage which included his foreign minister, Osman Saleh, and his top advisor, Yemane Gebremeskel, celebrated the opening of Eritrean embassy in Addis Ababa.

The embassy premise which stands in proximity to Addis Ababa Stadium was closed for twenty years following the war between the two countries.

Eritrean National Anthem was playing as Isayas Afeworki, Eritrean president, and Ethiopian prime minister, who fought as a soldier during Ethio-Eritrean war, raised the Eritrean flag together in the premises of the embassy.

Re-opening of the embassy is believed to even foster the relationship between the two countries. Ethiopia is expected to open an embassy in Asmara and name an ambassador as well.

Memorandum of understandings for close co-operation between the two countries in the areas of political, economic, security and cultural relation is signed. However, details of the agreement are not known to the public yet.

Some analysts are positive about peace deal and relation between the countries is restored to normalcy. Yet, there is visible criticism, and concern, among some politicized Ethiopians and analysts, that the relationship needs to be based on principle and guided with policy in order to avoid another possible conflict which could lead to war if it happens.

In a remarkable show of respect and love to the Eritrean people, as many Ethiopians seem to think, president Isayas Afeworki was given an unprecedented warm welcome upon arrival and in the course of his three days stay.

There are Ethiopians who admire Eritrean president on grounds of his leadership for his own cause but many Ethiopians do not seem to trust him when it comes to Ethiopia.

In a concert organized at the Millennium Hall in the capital Addis Ababa to herald peace between Eritrea and Ethiopia, which draw an estimated 25,000 crowd, Isayas seemed to have a message for skeptics when he said: “we are one and will not allow anyone to obstruct or disrupt our love.”