Ethiopia and Eritrea formally declared end of state of war between the two countries. They are to cooperate in a range of areas including security in the region. 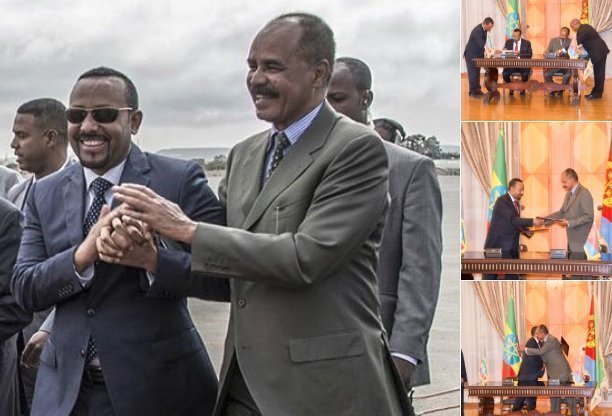 For the first time in more than twenty years, an Ethiopian Airlines’ plane landed at Asmara International Airport this past Sunday morning.

Ethiopia’s new prime minister and his entourage were the first Ethiopian officials to ever set foot in Asmara after 20 good years.

Looking at the reception to the Ethiopian prime minister in the streets of Asmara and at the airport which rather manifested a deep respect and love for one another, it is hard to imagine that the two countries wagged one of most deadly war in the history of Africa.

Abiy Ahmed and his entourage were even invited to the residence of Eritrea’s president where they sipped coffee – traditional style. in fact, as Eritrean high-level delegation concluded a two-day working visit to Ethiopia towards the end of June, the prime minister sent Eritrean president Isayas Afeworki a sack of coffee bean symbolizing intimacy.

Apart from the warm receptions which kind of demonstrated level of readiness, among other things, to restore normal relation between the two people who happen to have a shared history, culture, religion and even blood relation in the cases of many Eritrean and Ethiopian families, five points joint declaration of peace and friendship memorandum of understanding is signed yesterday – according to Ministry of Foreign Affairs.

And one of the declarations is the cessation of the state of war between the two countries. They also vowed to cooperate in the political, economic, security and cultural areas. Accordingly, diplomatic ties and trade are to resume soon.

Eritrea is to open its embassy in Ethiopia and the vice-versa. Given the strength of the relation between people in the two countries, the opening of embassies seems to be more for reasons of formality rather than necessity especially if the open border is to be operational. Eritreans do not seem to feel as if they are in another country when they are in Addis Ababa and many Ethiopians say that they can’t wait to go to Asmara for vacation.

Ethiopian Airlines will soon start its commercial flights to Eritrea and a direct telephone line between Eritrea and Ethiopia is to resume as well.

Utilization of seaport, most likely the port of Asab which many Ethiopian believe that it belongs to Ethiopia, is among issue that the two countries have agreed about but the update from the ministry of foreign affairs of Ethiopia left out details about it.

The two government have also agreed that the boundary commission’s, which was established by the Algiers peace agreement, is to be implemented.

Furthermore, the two countries are to cooperate on regional peace and security.

Ethiopia is already walking the talk about restoring good relations between the two countries as the Ethiopian prime minister has formally submitted a request for the United Nations’ Secretary, Antonio Guterres, who is on a working visit to Ethiopia, the end of sanctions on Eritrea.

Level of optimism about the prospect of a bright future for both countries is high both in Eritrea and Ethiopia.