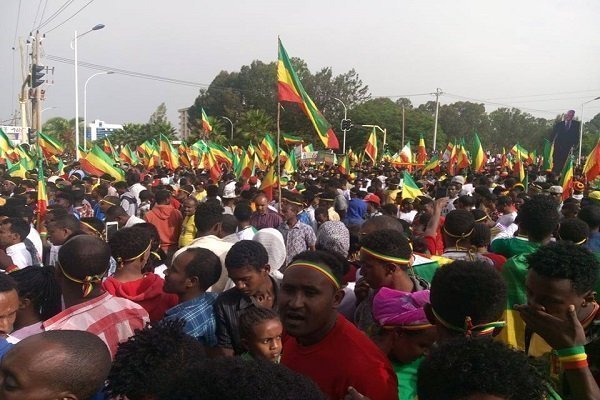 About twenty towns organized a rally in support of Prime minster Abiy Ahmed Administration reform agenda. Woldia (where more than ten people were shot dead during a religious festival this year), Debre Birhan, Sekota and 17 other towns have organized the rally.

The largest one happened in Bahir Dar today where demonstrators marched with a 500 meters long and six meters wide flag. Hundreds of thousands of people attended the rally waving historic Ethiopian flag. Unusually, the regional police were also seen waving the same historic flag. An Airforce helicopter was also seen hoisting it from the air.

Prime minister Abiy Ahmed didnot make it to the event but his message was conveyed through the deputy prime minister Demeke Mekonen who told the crowd that “Ethiopia will no more a country where a few dictate things as they please while millions are suffering.

Prime minister Abiy Ahmed expressed heartfelt gratitude to the organizers of the rally, as tweeted by his chief of staff Fitsum Arega.

The Rally in Bahir Dar concluded without any security incident.