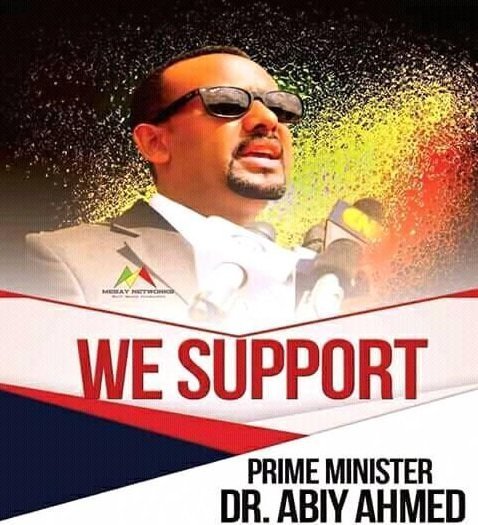 Four million Ethiopians are expected to stage demonstration in the capital Addis Ababa early Saturday as an expression of gratitude to what Abiy Ahmed has accomplished for Ethiopia in the last three months. It is also meant to support his planned reform measures which are believed to heal the nation divided along ethnic lines,among other malaise.

Organizers of the demonstration say Addis Ababa City Administration has already authorized the event, and its law enforcement branch, Addis Ababa police commission,will be deploying its force to ensure that no security issue is capable of marring what is going to be unprecedented demonstration in the recent history of Ethiopia. As safety precaution, no parking is allowed in the areas adjacent to Mesqel Square, where the demonstration is taking place. The major concern,from what many analysts say, is that TPLF could instigate conflict that affect ethnic Tigray Ethiopians by deploying mercenaries and that, it it happens, could degenerate the demonstration into something else.

Technically, the demonstration is in support of the Ethiopian government and the coalition party that has ruled the country for nearly three decades is still in power. Authorities didn’t have any problem even in the past to allow pro-government demonstrations anywhere in the country. What makes this one different is that it sounds more like a celebration of the result of power dynamics within the ruling party which ushered in the emergence of an opposition like,at least so far, political force from within the ruling party.

In just a matter of three months, prime minister Abiy Ahmed’s administration managed to release political prisoners including one that was in death row, Andargachew Tsige. Secured the release thousands of of Ethiopian migrants from five countries he visited in Africa and the middle east. Removed chief of defense force and director of Ethiopia’s intelligence agency,among other officials, who were extremely unpopular. Conducted extensive community consultation across the country to identify policy priority areas. Introduced a paradigm shift vis-a-vis policy on Eritrea by pledging to accept the Algiers Peace agreement that ended the two years war between the two counties – for which Eritrea responded positively after weeks of silence. Secured $1 billion in financial aid from United Arab Emirates to ease foreign currency shortage. And more importantly, he promised democratic reforms along the lines of the rule of law and democracy.

However, the demonstration tomorrow is tacitly intended to be a proactive measure to oppose reactionary forces within the ruling party that seem to be working towards reversing the reform measures. When the prime minister was visiting Uganda and Egypt, TPLF called for an emergency meeting to discuss “regional issues which is Tigray and the situation in the country.” What came out of the meeting in the form of party statement, which accused the ruling coalition of ideological betrayal, alarmed Ethiopians giving rise to the need to organize a massive demonstration across Ethiopia which seemed to be successful even before it happened. TPLF chairman spoke out this week and disclose that his party supports EPRDF decision.

Tomorrow’s demonstration is organized with the motto “Let’s support Democracy.” According to the organizers, more than 2000 volunteers are ready to coordinate the demonstration. Thousands of T-shirts bearing the image of Prime minister Abiy Ahmed are already sold. The organizers have also invited the prime minister himself to attend the four million people event. And it is confirmed that he will be attending it. Outside of the capital, similar demonstrations are organized in Nazareth, Debre Markos, Dessie, and reportedly in Gonder as well.

In Overseas, Ethiopians in some North American and European cities have put together similar events to support the prime minister. Further, notable Ethiopian politicians like Colonel Goshu Wolde and activists like professor Almariam have called on Ethiopians to support the Abiy Ahmed reform plans and be vigilant of those who are working to reverse what looks like,on the surface,a path to democratic Ethiopia. Ethiopia’s pop star, Teddy Afro, has endorsed Abiy and called on his supporters to attend the demonstration in Addis Ababa. So far, all seem to be going well for the prime minister. It does not,however, mean that there are no skeptics or even vocal critics. Politicians with leftist tendency rather see him as “imperialist agent” although the Ethiopian left does seem to be virtually non-existent as a political force for a long time now.

The question is will the new prime minister be able to reconcile opposing political and economic interests in the country? Will he be able to introduce constitutional measures, like what Rwanda did, to reverse ethnic based violence which is under reported and which has been raging the country for many months now?