Why Ethiopia is the tipping point to the emergency of Christianity and Western civiliazation—and Democracy as the consequence of these antecedents. It is one of those facts that had never come to light or had been acknowledged by us or outsiders. There were causes and consequences in Ethiopia’s past that led to the world of today. Lake Tana and Abay (aka the Blue Nile) had played crucial roles in them.

In Desta 4, the above suggestions are seamlessly woven into the narrative. In the super structure of the novel, however, Desta still continues his dual mission: earning a modern education and reuniting King Solomon’s Coin of Magic and Fortune with its twin shekel that he owns. Heeding the ancient prophecy, he journeys to a remote town to pursue his goals but soon discovers that he is there to learn of his ancestral roots and gain the knowledge and tools needed for his quest.

Desta meets Tsadok, his benevolent spirit-guide, who reveals Desta’s profound ties from the storied waters and soils of Ethiopia to sacred and powerful Near Eastern monuments and artifacts to all of Western history.
He learns that the blood of ancestral prophets, priests, princesses, and kings, from Judah and Egypt to Nubia, courses his veins; and that he has been predestined to safeguard King Solomon’s spiritual legacy and magical powers for a heretofore hidden purpose.

Desta’s high school studies and a kindly benefactor inspire him to pursue a medical career. Yet as Tsadok’s lessons fill in the pieces of a cosmic puzzle, Desta’s vow to reunite the magical coins pulls him away from his personal goals. Torn between his dual callings, Desta must choose whether to defer his personal dreams, not knowing where or when his search for the coin will end. His future a mystery, and guided only by faith in himself, his roots, and his destiny, Desta forsakes his familiar world, and embarks uneasily on a voyage into the unknown.

Reviews: “Riveting, relatable and universal. . . . Desta: Roots is a fascinating meditation on the ways in which the past informs and steers our lives, how seemingly small events lost to history ripple down the centuries to shape individuals and civilizations, and how such insights can profoundly inspire us to face today’s challenges.” Vincent Cusenza, author

Getty Ambau was born in Ethiopia. He came to the United States as a student, where he attended one year at a high 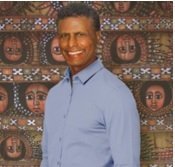 school in Ohio. Later, he entered Yale University, where he majored in economics and molecular biophysics and biochemistry. After he graduated, he worked in research labs, earned an advanced degree in business, ran his own companies, but writing has always been his inner calling. He is the author of the award-winning Desta series and nutrition books which became international best sellers. Book Two of his novels was featured in both the digital and print versions of Kirkus Reviews magazine. He lives in the San Francisco Bay Area with his wife, Rosario and a precious terrier called Scruffy.
____
Contact information is as follows :
Getty Ambau, getty@gettyambau.com
Phone: 408-483-1798