Ethiopian PM in Egypt for an official visit ; met with Sisi 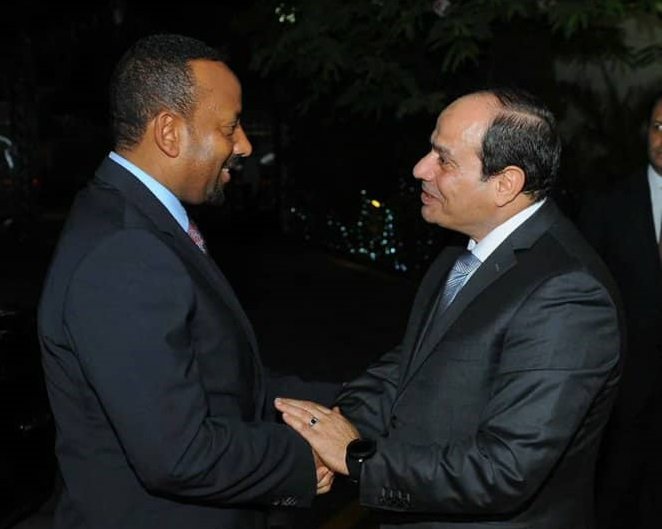 Abiy Ahmed arrived in Egypt on Saturday evening for an official two days visit in the country. He was reportedly received warmly upon arrival in Cairo by Egyptian president Abdul Fetah Al-Sisi.

Abiy traveled to Egypt from Uganda where he received “The Pearl of Africa Grand Medal” Award from Ugandan President Yoweri museveni on Heroes, a national holiday in the country, “for his reconciliatory leadership in achieving peace & stability in Ethiopia & for extending Olive Branch to #Eritrea,” as tweeted by his chief of staff Fitsum Arega.

Abiy is accompanied to Egypt by high level delegation and is expected to hold discussion with Egyptian president Sisi on matters of bilateral relations,trade and regional issues, according to Ethiopian government sources. River Nile and Ethiopia’s Grand Renaissance Dam project, which has been a controversial issue between to two countries for the last few years, is also expected to be in the agenda for discussion between the two leaders. Egypt Today was specific as to what exactly is the agenda item regarding the talk on Nile ; “the potential negative impacts of the Grand Ethiopian Renaissance Dam (GERD) on the downstream countries (Egypt and Sudan)”

Abiy Ahmed and Abdul Fetah al-Sisi are scheduled to hold a joint press conference on Sunday after a bilateral meeting.

Ethiopia and Egypt have been trading war of words sometime back after Egyptian president ranted “Nile is a matter of life and death for Egypt” – connoting that it is a red line. Ethiopian authorities responded to what was then understood as a form of “threat of war” in like fashion asserting that The Grand Renaissance Dam, estimated to cost well over US$ 5 billion, is a matter of life and death. When completed the Dam is expected to generate 6000 MW of electric power.

Egypt, Ethiopia and Sudan have been holding tripartite talks on the dam following “concerns” from Egypt that the Ethiopian dam project reduces the flow of water to Egypt.

Despite the three countries agreed on hiring a private firm from France to complete impact assessment, no agreement was reached until last month on the terms of reference as Egypt wanted to make Ethiopia accept the 1959 agreement on Nile to which Ethiopia was not a party.

More than 85 percent of the Nile water originates from Ethiopia.