Groovin’ and Jammin’ With Teddy “Ethiopiawinet” Kassahun in L.A. 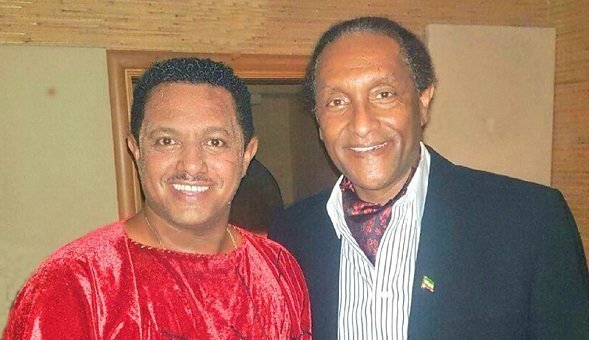 Who’s is the hardest working man in show business?

Back in my day, it was James Brown. Down in Augusta, GA where I went to college. “In my hometown where I used to stay, The name of the place is Augusta, GA.“ sang it J.B.

We all did the Boogaloo with J.B.

Who is the hardest working man in show business today?

I say, it’s none other than Teddy “Afro” Kassahun.

Back in my day, “We (be) jammin’ / I hope you like jammin’ too…” That is to the freedom songs of Bob Marley.

Or when we were chillin’, we be grooving to King Floyd, “Groove me baby…”

Today, I am just groovin’ and jammin’ to Teddy’s “Ethiopia”. “Groove me, Ethiopia…”

Teddy Afro to me is Teddy Ethiopiawinet. I wrote all about it in May 2017.

For him, Ethiopiawinet means, “Love conquers all. One Ethiopia. God makes all things possible.”

For me, Ethiopiawinet means love of the humanity of the Ethiopian Beloved Community.

Dr. King imagined a Beloved Community where racism, discrimination, inequality will be replaced by an all-inclusive spirit of sisterhood and brotherhood.

Ethiopiawinet to me and Teddy means a Beloved Ethiopian Community where ethnic division, sectarianism, linguistic differences, class inequality and gender subordination is replaced by an all inclusive spirit of Ethiopian sisterhood and brotherhood.

When Teddy says “Love conquers all. One Ethiopia. God makes all things possible.”, he is simply practicing Dr. King’s philosophy of “Agape”. (Listen to Dr. King’s definition of Agape HERE.)

Oh, yeah! I am feelin’ alright. We are on the right track. The love track, that is.

Shakespeare in the opening lines of “Twelfth Night” wrote, “If music be the food of love, play on; /Give me excess of it…”

That was what Teddy gave us in L.A. last Saturday. Excess of music and love.

It was a full house at Club Soho in downtown L.A. Young Ethiopians were raising the roof.

Back in my day, we’re like, “Throw our hands in the air. And wave ’em like we just don’t care.”

The young Ethiopians were throwing their hand up in the air jamming to Teddy’s music like they just don’t care. They were diggin’ Teddy’s songs. 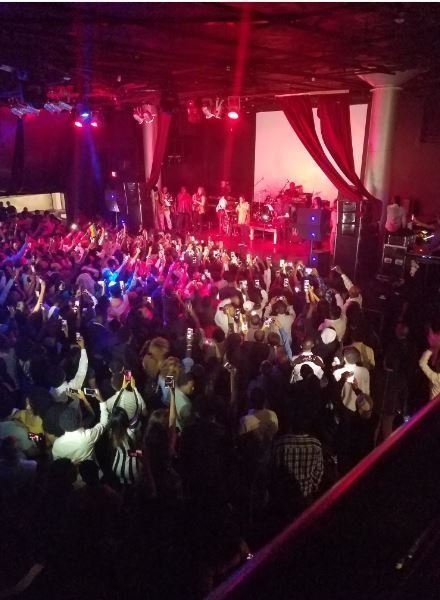 That is our new anthem, our national song. Our spiritual mantra. “Ethiopia! Hagere! Banch aydel wey kibre”. (Ethiopia, my homeland. You are my honor.)

I joined in at the top of my lungs. “Ethiopia! Hagere! Banch aydel wey kibre”.

I can’t carry a tune. It is a good thing nobody could hear me singin’ because the club would have been empty in a New York minute.

Teddy belted out one hit after another. The young crowd just loved it. They were hopping and jumping. Some were doing small group traditional eskista dance. Others were just moving and groovin’.

I was just diggin’ Teddy’s music, like we used to say back in my day.

The first time I saw Teddy perform was in 2011 in L.A. during his “Love Conquers All” concert tour at the Proud Bird. That show was something else. This is how I described my feelings at the time: “It is really great to be young; but for those who are not, the next best thing is to be at a Teddy Afro concert and jam late into the night with a ballroom full of irrepressible and euphoric young Ethiopian Angelinos.” I still feel the same way.

I am a couple years older, in a manner of speaking, since then but time has done nothing to Teddy except make him better, stronger, and a true master of his craft.

Back in 2011, I wrote Teddy is hopelessly in love with Ethiopia. In 2018, his situation has worsened. He is completely under Her spell and has made sure everyone, including myself, falls under Her spell too. Teddy cast the Ethiopiawinet spell on all of us.

Yeah, I don’t want a cure for this Ethiopiawinet love hangover!

Teddy paid a big price for his love of Ethiopia. He “lov’d Ethiopia not wisely but too well”, to borrow a phrase from Shakespeare.

In May 2017, Teddy transformed the musical landscape with his “Ethiopia” album.

It is a mesmerizing piece of work. The album is a work of genius. The lyrics are spiritually inspirational. The melody fills the soul.

Teddy’s poetic eloquence, polished diction, passionate patriotism and love oozing from every track of the album is simply transcendental.

Teddy laughs when I tell him I listen to his music every day. At home. In my car. On my cell phone. After all, does it not behoove his No. 1 fan to do so?

But I must speak the truth.

As hard as I looked in the crowd at the Soho, I did not see a single Hippo (older generation) in the sea of Ethiopian Cheetahs (younger generation).

That was a bummer, as we used to say back in my day.

What a pity. What a shame there was no Ethiopian in the crowd over the age of 35. (Oh, yes. I looked for them everywhere.)

I am not saying I felt uncomfortable among reveling Cheetahs. I have long declared myself a “Chee-Hippo”.

I wrote about it back in 2014. “A Chee-Hippo is a Hippo (member of the older generation) who thinks, behaves and acts like a Cheetah. A Chee-Hippo is also a Cheetah who understands the limitations of Hippos yet is willing to work with them in common cause for a common purpose.” That be me!

But I just don’t get it. I see members of my Hippo generation listening to Teddy’s music in their homes, care, on their cell phones and other media. But they don’t show up to show some love to my brother Teddy? What up with that?!

As far as I am concerned, Teddy’s music speaks to young and old, boys and girls, Ethiopians at home and in the Diaspora. His uplifting music knows no ethnicity, nationality, religion, language or region.

For crying out loud, Teddy was #1 on the World Billboard Chart in May 2017. Everybody loves Teddy.

But why are we older generation Ethiopians not showing up at his concerts and showing him love?

Are we having a generation gap problem?

So, I checked around with some of my Hippo folks.

They say, “It’s for young people. We don’t have the energy to stand on the floor and raise the roof. They don’t have seats and tables. He needs to have a concert for the older generation.”

I found out that it was not a generation gap issue at all. It was a simple issue of logistics. Hippos like me like to sit down and enjoy the music. Do a little eskista dance and just hang loose. Many of us just can’t throw our hands in the air like we just don’t care. Father Time has pulled his timeless trick on our bodies.

Maybe we can get Teddy to do an event for the older generation. We know how to jam and groove too! Old school, that is.

If we can’t go to Teddy, then Teddy needs to come to us. That does not mean we can’t attend Teddy concerts. He is having a tour and this weekend will have a concert in the Washington, D.C. area.

Let’s show up, and show some some love to Teddy and sing with him, “Ethiopia Hagere, Banch aidel wey kibre”.

If you are young at heart, it is hard not to open our heart and let in the sunshine of “One love. One Ethiopia.” If we broaden our minds, we can find space for everyone in the Ethiopiawinet tent.

I want to publicly thank Teddy for all he has done to spread his message of love, understanding, tolerance, civility and unity in Ethiopia and in the Diaspora. He kept the flame of Ethiopiawinet alive when the hard winds of tyranny were blowing across the land. That little flame of Ethiopiawinet Teddy kept in his heart is today warming the hearts of millions at home and abroad.

For years, I have been preaching Ethiopia’s resurrection (tinasae) will be handed down from above to the younger generation.

In my January 17, 2017 commentary, “Dare to Dream With Me About the New Ethiopia in 2017”, I challenged all Ethiopians to rise up, lock arms and march together as ONE people to meet their destiny.

In January 2017, my dream was to see ONE Ethiopia at Peace and a nation united by its history and the suffering of its people.

In January 2017, my dream was to see brotherhood and sisterhood in Ethiopia and Ethiopians finding their unity in their humanity instead of their ethnicity.

In January 2017, I dreamt of the day when Truth shall rise from the ashes of lies and lead all Ethiopians on the path of reconciliation in Ethiopia.

That dream is becoming a reality today before my eyes. It is all because of young people like Teddy who preached and practiced Ethiopiawinet.

Thanks Teddy for all the uplifting songs when we were in the pits.

Thanks for preserving our long history in the words of your lyrics.

Thanks for restoring our pride in our Ethiopiawinet!

“…Your sons and daughters will prophesy, your old men will dream dreams, your young men will see visions…”